Anonymous sources report that the “unified” democratic strategy for America was taken from the children’s book Why Mommy is a Democrat.

Democrats are using a page in the book to base their wartime strategy. 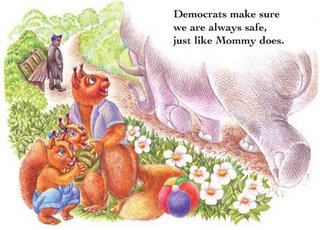 Democrats have actually been working this plan for years and their attacks have been relentless:

* They voted against the Patriot Act that has helped convict over 200 terrorists and counting.
* They vote against the Iraq War after they admit to the clear threat of Iraq.
* Or, they vote for a war they are not willing to finish.
* They attack a war time president for wiretaps on terrorist calls coming into the country that helped prevent attacks and save American lives.
* They demean the contributions of strong allies in the War on Terror.
* Democrats often repeat bogus polls to make it look as if Iraq is a country where a majority of the people agree with suicide bombing attacks.
* They openly attack our allies for investing in America while their husbands were on the dole to the promote the investment.
* They accuse the US military of degrading and abusive treatment of prisoners at Guantanamo Bay and say it is common (Never mind that prisoners would rather stay at Guantanamo than be transferred to their home countries.)
* Democrats are accused of “guerilla warfare” on US troops.
* The second highest ranking democrat accused our soldiers of running gulags in prisons saying “…describing what Americans had done to prisoners in their control, you would most certainly believe this must have been done by Nazis, Soviets in their gulags, or some mad regime – Pol Pot or others.” where the average weight gain was 13 pounds.
* They accuse the US military of running torture chambers similar to Saddam Hussein!
* They accused the military of creating a culture where prisoner abuse is a common practice.
* Their former presidents throw out personal attacks at the current Commander in Chief.
* Their former presidents travel to the Middle East to question the mission in Iraq while we have soldiers fighting a war there.
* Their former vice president trashes Bush and the US in a trip to Saudi Arabia.
* They exaggerate civilian casualties when official counts are much lower.
* They claim the military has lowered its standards to meet recruiting goals when this is not true.
* Democrats pursuade potential recruits not to join the service.
* They attack the US for paying for honest and positive propaganda in Iraq.
* Democrats are accused of damaging the morale of the troops.
* Democrats insist that a consistent Iraq War critic is a hawk.
* Democratic strongholds ban military recruiters.
* Democrats ignore progress in Iraq.

Generation Why has more on the Democratic agenda.

Jim Hoft
Jim Hoft is the founder of The Gateway Pundit, one of the top conservative news outlets in America. Jim was awarded the Reed Irvine Accuracy in Media Award in 2013 and is the proud recipient of the Breitbart Award for Excellence in Online Journalism from the Americans for Prosperity Foundation in May 2016.
Developing: President Trump's Independence Day Greeting Included Teaser on Big News Coming Soon
Eagles Wide Receiver DeSean Jackson Says He Doesn't Hate Jews After Posting Anti-Semitic Quotes Attributed to Adolf Hitler
UN Says United States Broke the Law by Drone Bombing Notorious Iranian Terror Leader Qassem Soleimani
EPIC TUCKER CARLSON: Can the Left Lead a Country they Hate? (VIDEO)
Washington Post Says Washington and Lee University MUST CHANGE ITS NAME because Washington "Perpetrated Racial Terror" -- So What About the Washington Post?
See more...