“They haven’t killed us yet. We are not panicking.”

“As reported by RFERL, at 3:30am, the operation in Belarus was over. All protesters, about 460 people, were taken away in police buses. Among them is Valancina Palevikova, one of opposition leaders, and my God, some of my best friends!!! Most of the analysts were expecting that this would happen, but hell, my heart sank!” 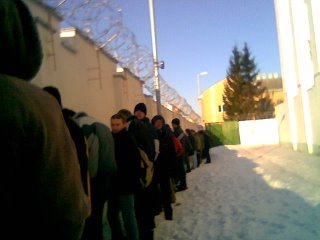 Babruisk has amazing pictures from the siege on the square.

Rush Mush has this moving account of the police seizure of Oktober Square, Via Neeka’s Backlog:

First we sat on the ground chanting “Police with the people,” then we stopped chanting. We just silently held each other’s hands. We weren’t afraid, because we were anticipating this.

Now we are being taken by a truck outside the city. Through a tony window we can see something and figure out where we’re being taken. Somebody said Cimiriazeva street, then Arlowskaya. Looks like we’ve left the city already.

Some guys got beaten up. They have blood on their faces. In our truck, girls didn’t get beaten. They haven’t shot us down yet. We are not panicking. 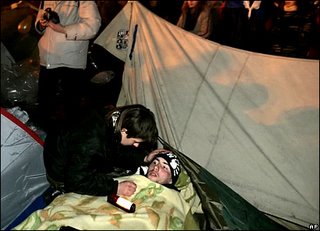 A woman comforts a protester who had been beaten by police. (BBC) 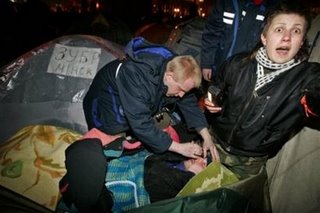 A Belarusian paramedic, left, helps a protester who was beaten by police during a rally on a main square in central Minsk, Belarus, Thursday, March 23, 2006. A top trans-Atlantic democracy and security body said Thursday it had information of about 200 detentions in the three days following the election, and called on authorities to release those detained in connection with the protest. (AP Photo/Ivan Sekretarev)

The United States has joined European nations today in imposing sanctions on Belarus in retaliation for its crackdown on political protesters last night after a fraudulent election. 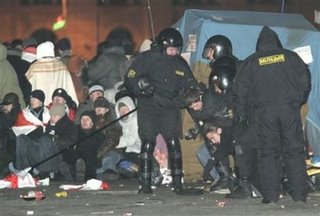 Charter 97 has news that the Opposition is still planning a protest for tomorrow and is hoping for a large turnout. 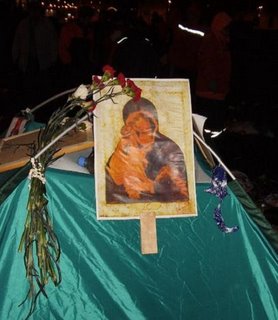 Garbage trucks moved right in to erase any trace of a rebellion.
Picture via “Frut” 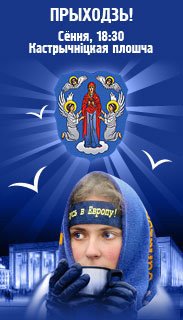 A protest sign for Belarus. (Via Charter 97)
80% of the population in Belarus are Eastern Orthodox Christians, by the way.

Neeka’s Backlog and Belarus Elections 2006 have updates.
BR23 has a roundup on the crackdown from last night.

Iran and Russia were the only two countries to recognize the election results from last weekend’s vote. President Assad from Syria extended his congratulations.

Of course the World Socialists saw this as imperialistic intervention from the West.