Could this be part of the reason why Democrats want an immediate vote on the UAE ports deal? It certainly helps Hillary if the story just goes away.

Bill Clinton made hundreds of thousands working for the UAE. Bill even tried to get his good friend work promoting the state owned Dubai Ports World!

Yet, Senator Hillary Clinton had the nerve to play off like the former president just had one phone conversation with the UAE. Hillary said on Thursday that:

“The president, my husband, supports my position, a position that is rooted in legitimate concerns about security.”

This could not be further from the truth!

“I did not have relations… 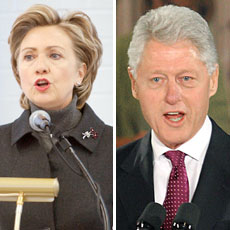 …with that port company.”
But, his relations with UAE top officials who pull the strings are extensive!

Here is what the media is saying to protect the favorite senator and world traveling husband:

The telephone chat between Clinton and the UAE officials, which took place while the former president was traveling in Pakistan, ended with his advising state-owned Dubai Ports World to voluntarily submit to a 45-day probe, said people familiar with the exchange.

The former president’s Dubai discussion was first reported in Thursday’s editions of the Financial Times.

The senator’s fundraisers have tried to cash in on the popularity of her anti-Dubai Ports World stance. An e-mail sent Monday listed her recent comments and directed donors to a Web page to make “Friends of Hillary” contributions.

But that is only the tip of the sand dune for the president and his UAE dealings:

In November, Bill Clinton referred to the pro-U.S. Dubai government as “a role model” for the Mideast.

While Sen. Hillary Rodham Clinton was ripping President Bush’s handling of American ports management, Bill Clinton was pushing for one of his favorite White House aides to be hired to defend the deal. The former president proposed to the United Arab Emirates (UAE) his onetime press secretary, Joe Lockhart, as Washington spokesman for the UAE-owned company, Dubai Ports World.

The Lockhart deal was never consummated. But the spectacle of the two Clintons going in opposite directions on the UAE port-management question exposed a Democratic fault line. Widespread public reaction against outsourcing control of the ports was seen by Sen. Clinton and other prominent Democrats as a chance to outflank the Republicans on homeland security in this year’s elections. Behind the scenes, however, Democrats aligned with the Clinton family were lobbying for the UAE.

According to well-placed UAE sources, the former president made the suggestion at the very highest level of the oil-rich state. The relationship between him and the UAE is far from casual. The sheikdom has contributed to the Clinton Presidential Library, and brought Clinton to Dubai in 2002 and 2005 for highly paid speeches (reportedly at $300,000 apiece). He was there in 2003 to announce a scholarship program for American students traveling to Dubai.

Certainly, the emirs would pay the closest attention to any request from the former president. Lockhart did confer with DP World officials, but they failed to reach agreement. The UAE sources said that Lockhart’s asking price was much too high.

Lockhart did not flatly deny to me that Clinton had made a pitch for him, but instead said he did not know whether the former president was involved. Lockhart said he was recommended by another Clintonite: Carol Browner, the former Environ-mental Protection Agency chief and now a principal in the Albright Group lobbying firm. Headed by former Secretary of State Madeleine Albright, the company is representing DP World. Lockhart told me “money was not the problem” as he turned down the offer.

UAE sources, contending that Lockhart priced himself out of the market, asserted there was no question but that Clinton had intervened on his behalf and added it was not possible that Lockhart had not known about his former chief’s intervention.

Robert Novak reported that aides to John Kerry and John Edwards have also been hired to promote the deal:

While Lockhart may have been a bridge too far for DP World, the UAE has reached out to high-priced Washington lobbyists on both sides of the aisle (including Republicans Bob Dole and Vin Weber). Leading the way in putting together the port deal was Jonathan Winer, a leading Democratic lobbyist who spent 10 years as Sen. John Kerry’s aide. Winer’s associate at the Alston & Bird law firm supporting DP World is Kathryn Marks, who was policy director for then Sen. John Edwards. Former Democratic Rep. Tom Downey, chairman of his own lobbying firm, is also on the Dubai team.

In contrast to Democratic operatives working behind closed doors are Democratic lawmakers attacking the ports deal in the open. Speaking to the Jewish Community Relations Council at Manhattan’s 92nd Street YMCA on Sunday, Sen. Clinton went beyond questions of homeland security. She called the Dubai deal “emblematic of a larger problem” of ceding “some of our fiscal sovereignty.”

An Israeli shipper has endorsed the UAE ports deal.
President Bush is visiting another imperfect Muslim country today.
Tony Snow writes about “The Essence of Surrender”.
The Anchoress does not for a moment believe that President Bush has suddenly abandoned his promise to defend the nation.

Update: Mensa Barbie has more on the selective memory going on here.