Millions of Shia are concluding their pilgramage to the holy city of Karbala after the 40th and final day of mourning. 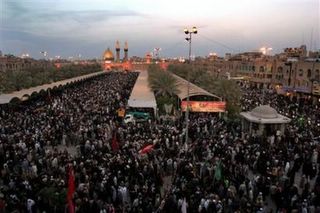 Iraqi Shiite Muslims throng to worship, in Karbala, 80 kilometers (50 miles) south of Baghdad, Iraq, Monday, March 20, 2006. A million Shiite Muslim pilgrims descended on the holy city of Karbala to mark the 40th and final day of mourning for Imam Hussein, the Prophet Muhammad’s grandson on Monday, who killed in Karbala in 680 A.D., as thousands of Iraqi security forces braced for possible sectarian attacks. (AP Photo/Hadi Mizban)

Over a million Shia pilgrims desended on Karbala while Iraq continued with its Civil War. 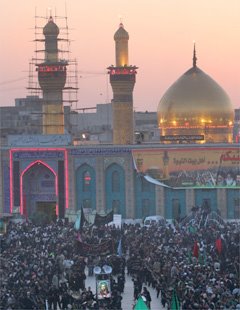 Iraqi Shiites Muslims flagellate themselves with chains, during a procession, in front of Imam Hussein’s shrine, in Karbala, 80 km south of Baghdad, Iraq, Sunday. (AP/Hadi Mizban)

Kurds also took time to celebrate a religious holiday during this Civil War. 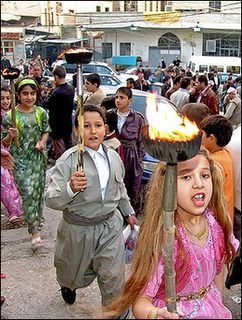 The Belmont Club looks at the Civil War claims:

So what’s the truth? The principle in determining truth should be to apply the factual indicator test. A civil war is a visible event whose indicators include the insubordination of armed units, mass refugee flows, the rise of rival governments, etc. The test is whether those events are being observed. What famous individuals say about a situation is a shortcut for encapsulating a factual assessment; it describes reality as public figures see it but is not the reality itself. . . .

Politically what’s interesting is how the narrative has changed. Nobody is talking about the Sunni insurgency succeeding any more. Even the press hardly makes the claim of an insurgency on the brink of success. As late as November 2005, the Daily Kos was boasting: “The occupation is exacerbating terrorism in the country. America is losing, the insurgency is winning. Maybe we should say, ‘has won.'” But by the December 2005 elections this view could no longer be held by anyone with the slightest regard for the facts. . . .

Instead of insurgency the talking points have changed to how Sunnis might soon become victims of an ethnically hostile Iraqi army in a Civil War. Going from a boast of conquest to a portrayal of victim is usually an indicator of something. In my view, the shift of meme from the “insurgency” to a “civil war” is a backhanded way of admitting the military defeat of the insurgency without abandoning the characterization of Iraq is an American fiasco. It was Zarqawi and his cohorts themselves who changed the terms of reference from fighting US forces to sparking a ‘civil war’. With any luck, they’ll lose that campaign too.

Soldiers in Hilla enjoyed a whopper while taking a break from Civil War duty. 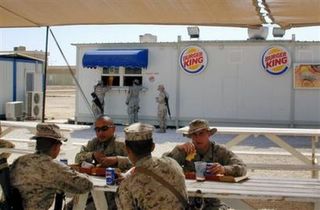 U.S. soldiers eat meals from Burger King, in al-Asad air base west of Baghdad. Elaborate bases like this one raise questions about how long the U.S. intends to stay in Iraq. (AP Photo /Charles J. Hanley)