Sarah Sands was fired as editor of the Sunday Telegraph on March 7, 2006.

Now she claims that it was because she published an “Islamophobic” article… which was later yanked! 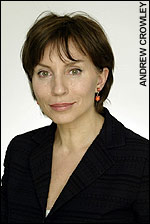 Sarah Sands will be replaced by Patience Wheatcroft as editor of The Sunday Telegraph.

Infidel Bloggers Alliance wrote in tonight that the Telegraph relieved editor Sarah Sands of her duties as editor after only nine months. Now she is claiming that she was released because of an article that she published unfavorable to Islam:

In an email, Sarah Sands, The TELEGRAPH UK, has informed me that she has been removed as editor at the Telegraph UK apparently, for placing an article of interviews in which a reporter finds, among other too predictable items:

Confirmation of what they believe to be a familiar pattern- if spokesmen for British Muslims threaten what they call ‘adverse consequences’ – violence to the rest of us – then the British Government will cave in. I think it is a very dangerous precedent.”

Dr Sookhdeo adds that he believes that “in a decade, you will see parts of English cities which are controlled by Muslim clerics and which follow, not the common law, but aspects of Muslim sharia law.

“It is already starting to happen – and unless the Government changes the way it treats the so-called leaders of the Islamic community, it will continue.”

Infidel Blogger Alliance has much more on the story.

The Sunday Herald reported that Sarah Sands had been removed but gave no reason for her departure from the Telegraph.

Infidel Bloggers has that original article. It was also republished at the Coalition Against Global Terrorism. The article was later removed from the Telegraph UK site because of concerns of “legal action”.