The regime cut off the elctricity to Oktober Square. The temperatures are subfreezing. The protesters continue to rally in October Square. 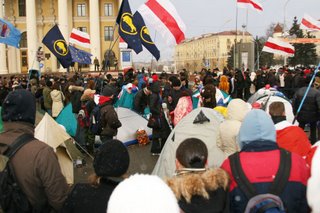 This picture of the protest and many more at Why Not By Blog.

Robert Mayer at Publius Pundit is following the revolution. 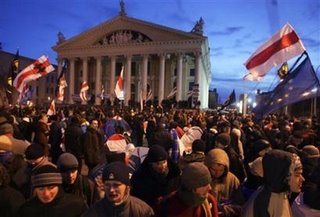 Supporters of Belarus’ opposition leader Alexander Milinkevich stand during a rally on a main square in central Minsk, Belarus, earlier Tuesday, March 21, 2006. Hundreds of demonstrators shivered and cheered through the freezing pre-dawn Tuesday in the capital of Belarus, trying to keep up momentum in an arduous and unlikely drive to overturn elections that gave a new term to the authoritarian who over the past 12 years has turned Belarus into a state denounced as Europe’s last dictatorship.(AP Photo/Sergei Grits)