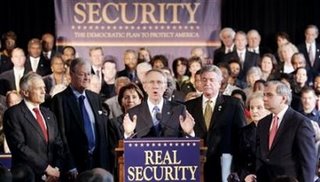 That was really just wonderful, Nancy. The country welcomes the Democrats new found commitment to join in the War on Terror.

But, first a few questions about your “Bold Security Agenda“:

Will you commit to quit slashing military spending?

Will you start voting for funding for our soldiers in harms way?

Will you now be supporting the Patriot Act?

Will you welcome military recruiters on liberal campuses?

Will you continue to coddle terrorist supporting dictators?

Will you now welcome the military in your capital?

Will you agree to close the borders, or maintain your current opposition?

Will you quit understating our progress in Iraq?

Are you still proposing that troops be redeployed to Okinawa to fight Islamic radicalism?

Will you finally admit to the extensive connections between Al Qaeda and Saddam Hussein?

Will you tell your Hawk to quit hurting troop morale?

Will you tell your Hawk to quit calling the Chairman of the Joint Chiefs of Staff a liar?

You say, “Eliminate Osama Bin Laden, destroy terrorist networks like al Qaeda, finish the job in Afghanistan, and end the threat posed by the Taliban.” So, who do you see as the enemy? Is it radical Islam or networks like Al Qaeda?

Does your new plan mean you will stop voting against intelligence spending?

Where will you keep your prisoners? You surely don’t want to send them to gulags, do you?

Will you continue with Clinton’s rendition program of transferring prisoners?

Will you still be hanging out at Camp Casey?

Who will be checking all of the shipping containers?

Will you start respecting the sacrifices of our allies?

Will you stop supporting terrorist propaganda?

Finally,… Will you still be storming the White House?

Sad as it is, the dems may do better when they just bitch and moan!

Clark Mountain Musings sees a different Democratic Party.
Big Lizards breaks down the PowerPoint presentation.
The Anchoress is not impressed.