In Australia… Saturday’s protest of 500 people was small compared to the mass demonstrations that swept across the country in the buildup to the invasion — the largest Australia had seen since joining U.S. forces in the Vietnam War. 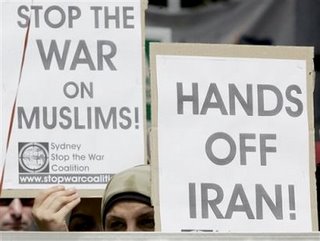 A demonstrator holding anti-war signs marches in a peaceful protest in Sydney, Australia, Saturday, March 18, 2006. Around 500 protesters marched through central Sydney on the anti-war rally, marking the third anniversary of the U.S.-led invasion of Iraq with a demand that coalition troops pull out. (AP Photo/Andrew Caballero-Reynolds)

In London… Authorities shut down streets in the heart of London’s shopping and theater district for the demonstration, which organizers had predicted would attract up to 100,000 people, but police estimated the crowd was about 15,000 people.

London protesters were upset with remarks by British defence secretary John Reid who said that “the crowd ought to be supporting the United Nations and the Iraqi people rather than protesting.” 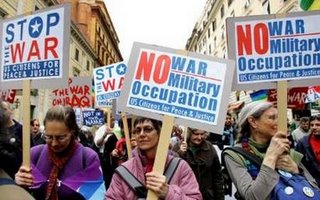 U.S. citizens march to Navona Square in central Rome March 18, 2006 in a demonstration marking the third anniversary since the invasion of Iraq. (Reuters)

In Tokyo… About 2,000 people rallied in a downtown park, carrying signs saying “Stop the Occupation” as they listened to a series of anti-war speeches.

In Sweden… about 1,000 demonstrators gathered for a rally in Stockholm before a march to the U.S. Embassy.

In Greece… about 600 demonstrators marched through central Athens to the U.S. embassy, where protesters chanted “Stop the War now,” and “American killers get out of Iraq.”

In Berlin… About 700 protesters marched peacefully through an inner-city district during a rally, police said.

In Austria… protesters marching through Vienna — about 200 by police estimates — chanted “Freedom, freedom for Iraq and Palestine,” as they made their way to the U.S. embassy. 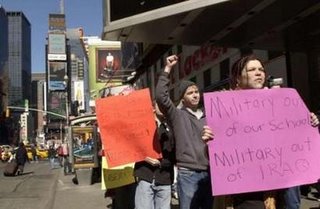 On the sidewalk near New York’s Times Square. (Reuters)

The War Resisters League is planning a protest today in New York City.

30 high scloolers protested in Coldwater, Michigan. With the signs saying such things as “Fight poverty, not war” and “Get out of Iraq, now,” one particularly interesting one said “War is so 20th century.”

Paul Haggis, the Canadian director of “Crash”, this year’s Oscar winner for best picture, will lead a protest in Hollywood this weekend against the war in Iraq.

All Things Conservative says the protests were “less antiwar- more anti-American.”
John Stephenson has more.
The best line of the day comes from A. M. Mora y Leon at Publius Pundit:

“Not many people want to go to these stupid irrational things anymore, not after “peace mom” Cindy Sheehan kissed Iran ally Hugo Chavez on the lips.”