Another brutal death, this time on Saint-Martin, has stoked fears in France of a festering anti-white hatred among the country’s black and Arab populations. The death took place a day before the murder of Ilan Halimi but is just now reaching the mainstream news in France. 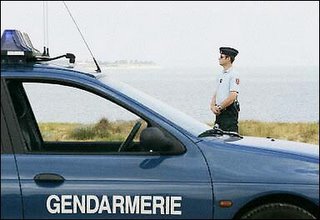 A gendarme stands guard. The accidental death of a gendarme on the Caribbean island of Saint-Martin has plunged France into a new spasm of race-related angst after his widow claimed that youths refused to help after he was hit by a speeding motorcycle and later gloated at the death of a white.(AFP/File/Patrick Bernard)

Another brutal racist death has stoked fears in France. This time the victim is a young white policeman or Gendarme and father of a four year old on the island of Saint-Martin:

With feelings already running high after the brutal murder in Paris of the young Jewish man Ilan Halimi, the events surrounding the death of 31 year-old Raphael Clin on February 12 have stoked fears of a festering anti-white hatred among the country’s black and Arab populations.

Clin was killed early on a Sunday morning when he tried to stop what he believed to be a “course sauvage” — an illegal high-speed race — on the French part of the island’s single main road.

Witnesses say he stepped onto the thoroughfare, but Cedric Hannicette had his head low over the controls and hit the gendarme at more than 100 miles (160 kilometres) an hour.

Clin was taken to hospital where he died shortly afterwards, and the 23 year-old Hannicette fell in a coma.

“at the scene of the accident the agony of gendarme Clin triggered a collective celebration by some 40 people. …. Shockingly not one of those present went for help or offered any assistance.”

And there was worse. According to Stephanie Clin, when she arrived at the hospital she saw a crowd of friends and family-members of the motorcyclist.

“They were insulting the gendarmerie and when news came out that my husband was dead, they were all smiling and saying it was a victory to have killed a gendarme who was to top it all a white man,” she said. 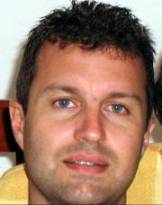 Authorities are wanting to explain away the death on St. Marten. With the arrival of thousands of immigrants from Haiti and other parts of the Caribbean, the population of the French part has multiplied by five in 15 years.

French blogger Hexagonews has much more on the story, including the testimony of Clin’s partner and colleague:

His partner asked for help, but nobody moved, they even blocked the rescuers!

“He was intentionally hit by a Yamaha 1000 motorcycle at an estimated speed of 150-160km/h. A colleague arrived to back him, and while he was dying, some people were singing the song “I shout the sheriff”; but replacing sheriff by Gendarme.”

“I announced the accident to his wife. We went to the hospital, where Raphaël was living his last minutes. A group of excited and threatening people was at the hospital, glorifying themselves of having killed a white Gendarme. One of them even threatened Stéphanie. Others were saying to our children that whites had nothing to do here, and that we had to go home.”

“It almost finished very badly … we had to remain so calm in such a difficult experience.”

Hexagonews also has another wild story of an attack on a receptionist in the city of Schiltigheim.

Stefania (whose birthday was yesterday. Happy Birthday!) points to another article today at FrontPage on the anti-Semitism in France.

There were three Jews attacked in France over the weekend.