At least, SIX democratic officials were convicted or sentenced this past week for election or tax evasion crimes.

Marion Barry was sentenced to three years of probation for failing to file federal income taxes for the past 6 years,
VIDEO HERE 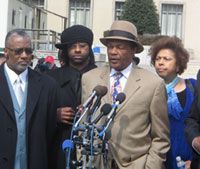 Marion Barry was pleased that he will not be sent to jail for his crimes.

Although, DC Councilman Marion Barry did not pay taxes on an estimated income $534,000 since 1999, he will not face jail time for his crimes:

Barry pleaded guilty last October to two misdemeanor charges after admitting to earning $534,000 from 1999 and 2004 and not filing the required tax returns.

Democratic precinct committeeman Leroy Scott is not so fortunate. He will be spending his next 10 months in federal prison for his role in an East St. Louis vote-buying scheme:

Scott, the former Democratic committeeman for Precinct 38, pleaded guilty nearly a year ago to taking part in a conspiracy to pay East St. Louis residents $5 and $10 apiece to vote for Democratic candidates in the November 2004 election.

Scott is the last to be sentenced among the four Democratic operatives from East St. Louis who pleaded guilty to taking part in the vote-buying conspiracy.

Five others were convicted of election crimes in a separate trial

Lillie Nichols and Terrance Stith were sentenced to four months in prison after their guilty pleas to aiding a vote-buying scheme a week earlier:

In addition, U.S. District Judge David Herndon sentenced Stith’s wife, Sandra, to a year of probation for the same crime. Like her husband, Sandra Stith had cooperated with federal prosecutors after pleading guilty nearly a year ago.

Herndon imposed the sentences after Assistant U.S. Attorney Hal Goldsmith asked for leniency. Goldsmith praised the defendants’ acceptance of responsibility and help in prosecuting former City Council member Charles Powell and his four co-defendants. (Even after his conviction last July!) Powell until last month was chairman of the city Democratic Central Committee. The others held public office or worked on the committee.

And, Denny wrote in with news about the conviction of former Atlanta Mayor Bill Campbell this week for tax evasion:

A jury has found former Atlanta Mayor Bill Campbell guilty of tax evasion charges and NOT guilty of racketeering and corrupt payment charges.

Earlier today, jurors asked the judge in the case whether it is against the law for a mayor to accept a speaker’s fee from a vendor doing business with the city.

The jury got the case yesterday and discussed it for more than five hours before adjourning for the night.

Prosecutors claim Campbell operated a web of corruption at City Hall during his two terms in office from 1994 to 2002. They say he ordered subordinates to collect thousands of dollars from contractors who looked to do business with the city.