“Honorable ladies and gentlemen of this Congress, I want to thank you. All the Liberian people sent me here to thank you for that vision. Our triumph over evil is also your triumph… Thanks also to President Bush, whose strong resolve and public condemnation and appropriate action forced a tyrant into exile.”

“Honorable Members… I will succeed!” 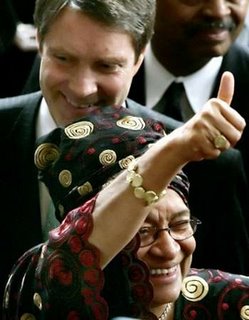 CSPAN2 replayed President Ellen Johnson Sirleaf’s speech to Congress this evening. She told her extraordinary story including the time she was thrown in jail with 15 men and only had one guard to protect her from rape. The 67 year old told of walking through mud and drinking water from creeks while campaigning this past year. She expressed hope that Liberia would become the shining star of Africa.

“Honorable ladies and gentlemen of this Congress, I want to thank you. All the Liberian people sent me here to thank you for that vision. Our triumph over evil is also your triumph,” Johnson-Sirleaf told a joint session of the US legislature.

Washington’s intervention, she said, “paved the way for a United Nations force that secured our peace and guaranteed free and fair elections,” she said in an address punctuated by numerous standing ovations from the US lawmakers.

Meanwhile, she said, hundreds of millions of dollars in US aid “laid the foundation for a durable peace, not only in Liberia, but in the whole West African sub-region.”

Barely three months in office, Johnson-Sirleaf, 67, becomes only the fifth African leader – and the first since former South African President Nelson Mandela nearly a decade ago – and eighth woman to address House and Senate members. 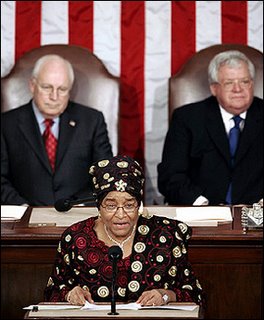 Liberian President Ellen Johnson-Sirleaf address a joint session of the US Congress as US Vice President Dick Cheney(L) and Speaker of the House of Representatives Dennis Hastert(R) listen on Capitol Hill in Washington, DC. Johnson-Sirleaf expressed her gratitude to the United States for its role in helping end the civil war that engulfed her country just a few short years ago.(AFP/Paul J. Richards)

The newly elected President gave special thanks to George W. Bush and his support for Liberia democracy:

Moving to more recent developments in her country Ms. Sirleaf thanked the Bush administration for helping to facilitate the negotiated exile in 2003 of former President Charles Taylor, which created the conditions for the election that brought her to power:

“Thanks also to President Bush, whose strong resolve and public condemnation and appropriate action forced a tyrant into exile, and thanks to you, the members of this august [noble] body, who spurred the international effort that brought blessed peace to our nation,” said Ms. Sirleaf.

All Africa news has more on her planned trip where she plans on speaking to Congress and meeting President Bush:

Ellen Johnson-Sirleaf, who was inaugurated as Liberia’s president on January 16, is expected to brief a joint session of Congress and meet with U.S. President George W. Bush.

“The Bush administration has played a positive role in pressing for Taylor to face trial at the Sierra Leone war crimes court,” said Richard Dicker, director of the International Justice Program at Human Rights Watch. “Now the administration needs to see this through by giving Liberia’s new president strong backing to request Taylor’s surrender. She should not be expected to shoulder this burden alone.”

Douglas Farah has more on Liberia and the deposed Charles Taylor, who not only wreaked incalculable damage on West Africa but also aided and abetted al Qaeda and Hezbollah.