“On behalf of all men, we pledge to stop acid terrorism.”

Cricketers, film-stars, academics, writers, civil leaders and acid attack victims were among some 5,000 people who took part in the rally. There were 268 vicious acid attacks reported in Bangladesh last year, most against women. 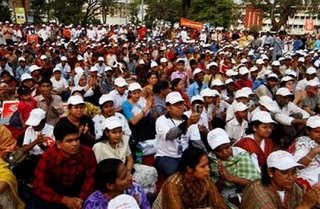 Around 2,000 Men protested in Bangladesh today against vicious acid attacks against women in the male dominated Muslim society:

“I urge all to stand by us so we can fight against such crimes,” said Shirin Akter, 18, who was attacked by her spurned lover two years ago. “I am struggling hard to stand from the ruins of my devastated life. I wish no other woman becomes a victim like me.”

A total of 268 people, mostly women, were attacked with acid last year in Bangladesh, a male-dominated, traditional society, according to the Acid Survivors’ Foundation, which sponsored the rally.

“We believe without men’s active participation we will not be able to eliminate such heinous crimes,” said Monira Rahman, spokeswoman for the foundation.

Most of the victims are women attacked by spurned lovers, but recently more men and children are being splashed with flesh-burning, agonizingly painful sulfuric acid in family arguments or disputes over property, Rahman told reporters.

There were 268 reported acid attacks in Bangladesh last year! 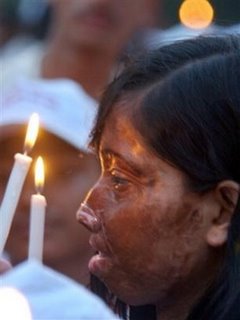 An acid attack victim holds a candle during a rally in Dhaka, Bangladesh, Tuesday, March 7, 2006. (AP)

Acid attacks remain a problem in Bangladesh even though the death penalty has been introduced if someone is found guilty of the offense:

The men, and some acid victims also present at the rally, called for greater government efforts to stop the brutal practice.

According to rights groups, throwing acid on women and girls remains a major social problem in Bangladesh.

That is even though a strict law has recently been introduced that provides for the death penalty for people found guilty of the offence. 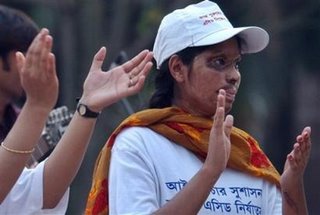 An acid attack victim performs in a dance drama during a rally in Dhaka, Bangladesh, Tuesday, March 7, 2006. (AP)