Nancy Reyes from Gapan City, Philippines sends the sad story of Manulite from Zimbabwe. Manulite’s home, as well as the home’s of nearly 700,000 Zimbabweans, was demolished during Operation Murambatsvina, or “Operation Take out the Trash”. Manulite blogged early in 2005 and then after his home was demolished he photo-blogged the streets of Harare. This is his story and the story of Zimbabwe under the Mugabe rule.

Zimbabwe this week conceded that runaway inflation would soon shoot up to a record 800 percent.

Agriculture officials in Zimbabwe Tuesday reported the country was experiencing a devastating outbreak of armyworms in a key farming province near the capital Harare, threatening the season`s crop harvest.

Zimbabwean tobacco production will be at an all-time low of 25 percent of regular yields prior to President Robert Mugabe’s land-grab from white farmers, which began in 2000.

Zimbabwe is also suffering from dark and dreary days and nights of electricity blackouts. 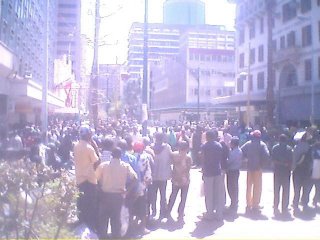 First Street in Harare, “The people here are queuing for Sugar, the people I saw were holding 1KG packs of brown sugar.” (Manulite)

Yesterday I caught a cold and today I woke up with a cramp; it isn’t very comfortable sleeping at a friend’s couch with one blanket in this cold winter. Of course you might already be asking why I’m sleeping on a couch, well, the thing is, this is not my house and it is crowded as it is. So maybe again you ask why I’m not sleeping in my own house? Good Question!

See my cottage was demolished by Operation Murambatsvina (Operation ‘we don’t want dirt’)on Thursday last week, so I had to move in with a friend since I had nowhere else to go. At least I didn’t have to do the urban-to-rural migration that most peeps who have been hit by the tsunami (which is what we now call the Operation Murambatsvina these days). Not that its a major benefit that I’m still living in the ‘bright lights’. Only the day before yesterday we had no electricity at night, I don’t know whether this is one of those rationing cut-offs or someone at the power company forgot to put the switch to ‘ON’ before knocking off from work…

…Today I woke up with a cramp, you see I’m still trying to master the art of sleeping on the couch in someone else’s house. These days I have cancelled breakfast, because the typical breakfast that I can afford: Three slices of bread with two cups of very sweet tea and occasional fried egg; has become impossible to prepare. The last time I saw sugar it was being sold from the back of TM supermarket with a long queue winding to the front of the shop. Cooking oil is rare. I have seen some brands that look like imported stuff going at unearthly prices which are quite out of reach. The only bread that you get these days has a name like ‘Super white’ or ‘Special Milk bread’ and also going at not so humanly prices. So there goes my breakfast.

Sad. very sad. sometimes life sucks, in fact, from where i’m standing, life sucks all the time. i’m in no mood to blog sense right now, sometimes you think you have it all figured out, but it has a funny nasty little way of telling you to go *beep* yourself. (Manulite) 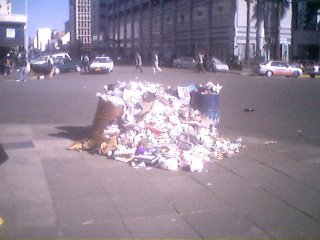 When you enter Harare, it says “Harare, the Sunshine City ” (Manulite)

When I got to the office I tried to call my pal, but I’m on this cellphone network that has recently ‘successfully upgraded their systems to give better service’, so what happens is I have to try 10 times before I get through. Of late it has been behaving strange, when I do get through, the other person could not hear me at all even though I could hear them clear.

But anyway, I called him to find out if he had had any breakthrough with getting fuel, I needed about 5 litres to move my Mazda 323 from that filling station to another one that has been pouring at night. He told me that for some ZW$ x00,000.00/per litre I could get something on the other market they usually called ‘black’. I had no option so I said OK, but hopefully I will have it tomorrow.

I also tried to look for accommodation, its not safe anymore to rent a cottage at some dude’s place cause you don’t know when tsunami will strike. Flats in the Avenues have reviewed prices drastically so I wont be able to afford it there.

So now as I’m sitted here writing this, I’m thinking about the 3-5 combi’s that will take me home. Well, small combi’s are being banned so it’ll be even more tricky. But I’m not complaining, this is life. This is the new way we are living it down here in our lovely Zimbabwe.

I went once into this diner, sometime back, me and a friend of mine. Turned out we were the only ones different there. The service we got there also turned out to be the most pathetic. First, the waiter seemed to hesitate to let us sit in the diner, then he seemed like he was not going to give us the menu, he wanted to be sure we knew what we were doing, and then on ordering I think the worry had shifted to “are you guys able to pay for this?” Apart from all this, I have to tell you the whole atmosphere felt like I was not in my country anymore. I felt like a total stranger in some world that I could never fit in. It was so refreshing to step out back into Zimbabwe outside. Outside my country was still there for me, outside the street kids were begging as usual. Outside people were buying vegetable to go and cook sadza for supper. Outside was the normal Zimbabwe, the one I grew up in.

Whites and blacks, we live different lives. And it feels strange sometimes. How a people, confined by the same bounds of a country’s borders. Can live such different lives. But then again who said we should not be different? We are bound to be different if we grew up in different enviroments, with different values, but sometimes, coming from the less privileged, you feel like something unfair is happening, maybe it is, maybe some independent observer (if such exists) is the only one to tell.

Mugabe Makaipa has
much more on the suffering of Zimbabwe.