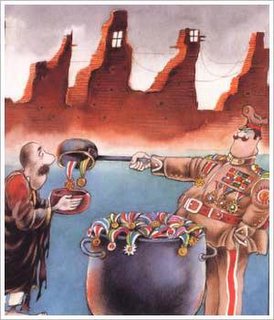 Or Does it Explode remembers a forgotten Euro-Arab cartoon controversy from years ago when there was a different strong man in the Middle East:

In 1988 an exhibition at the Institute du Monde Arabe in Paris had featured one of [Syrian cartoonist Ali Farzat’s] cartoons showing a general doling out medals from a stewpot to a man in rags. Implicitly this criticized one of the Arab regimes’ main ways of retaining power: by stirring up war and conflict as a substitute for material achievements.

Gee, do you think we are seeing that today? Just ask Freedom for Egyptians, Big Pharoah or Egyptian Sandmonkey!

Officals of Iraq, then at the end of a long bloody war with Iran, accused Farzat of making fun of their country, ironically confirming his observation by this act of recognizing it. The Iraqi government [i.e. Saddam’s regime] threatened to withdraw funding for the exhibit and, although the show was on free French soil, Farzat’s cartoon was removed, an example of how the regimes’ repression is so often accepted, and even reinforced in the West.

Today, Ali Farzat is living in Syria and is having a hard time getting his work published in the Syrian papers:

“They are afraid that if they do, they will get into trouble and could lose their jobs.”

It is not hard to see why his cartoons are considered sensitive. Many of them are brutally critical of figures in authority. A typical theme is of grossly overweight men in military uniform, rows of medals adorning their chests, showing their contempt for the common man.

One picture shows a starving man holding out a bowl out for food, but being given medals instead. (pictured above)

Another shows a flag-waving general leading his supporters over a cliff.

These are all images mocking life under a cruel dictatorship, where dissent is severely punished.

But nowhere is any specific individual identified. Nor is there any reference to a particular country. And yet, the message is clear to everyone. 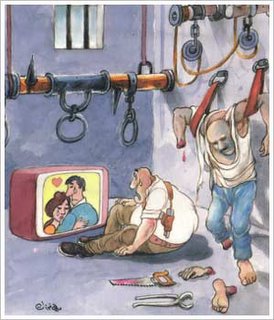 There is good news in Syria today with satellite TV and the internet:

“Any person even in a very poor place in Syria can now get the real truth, or at least different views, through all the international satellite TV channels.”

There is clearly a distinct mood both within the organs of the state and those who want to write without restriction, that the tide of information flooding into Syria is unstoppable.

And, back in 1988, although the officials caved in to Saddam Hussein’s demands, there was a happy ending to the Euro-Arab cartoon controversy after all:

But the other cartoonists rebelled, adding their own names to the offending picture and threatening to remove their work. For once, Iraq backed off.

Ali Farzat, the Arab Master, hasn’t been published since his satirical magazine was banned 3 years ago after only two years existence as the first private magazine in Syria. A published collection of his cartoons is now available.