“The lit up image of “Che” overlooked the event, as if nodding to the continuation of his own thoughts and struggles.”
– Granma –

Venezuelan President Hugo Chávez arrived Friday in Cuba for a visit to accept an international award from Unesco:

The U.N. Educational, Scientific and Cultural Organization gave the Venezuelan leader its 2005 International Jose Martí Prize. UNESCO created the prize, named for the Cuban patriot and national hero, to honor a person or entity that contributed to Latin American and Caribbean unity.

The presentation came a day after Donald Rumsfeld told an audience at the National Press Club in Washington that Chávez is “a person who was elected legally just as Adolf Hitler was elected legally and then consolidated power and now is, of course, working closely with Fidel Castro … and others.”

Latin Americans denounced the remarks Friday as they presented Chávez with the award before 200,000 people packed into the Plaza of the Revolution.

Martí, who died in 1895 during Cuba’s war of independence with Spain, has been glorified in Cuba as the ultimate anti-imperialist, a label both Chávez and Castro have embraced for themselves in their struggles with the United States. Bolivians and other Latin Americans studying medicine free in Cuba attended the ceremony, the island’s state-run media reported.

“It’s really sticking a finger in the eye of the United States for UNESCO to give Chávez an award,” said William LeoGrande, dean of the school of public affairs at American University and an expert on Cuba. “That UNESCO would give him an award and present it in Havana is really sort of a defiance of the United States, the sort that the U.S. often complains about with the United Nations.” 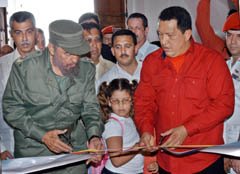 Hugo and Fidel cut a ribbon that opened the Venezuelan Pavillion in Cuba that will publish poetry, fiction, essays, testimonies, biographies and social research by Latin American and Caribbean authors. (Granma)

The Chavez Regime has been linked to FARC Terrorist activities and funding in neighboring Colombia and have been accused of meddling with many of the regional elections.

Saturday, February 4, 2006, thousands of demonstrators protested against the Chavez Regime. Publius has the story.