“During a news conference, they spoke about a proposal from the far-right Danish People’s Party to ban the Koran in Denmark because of some 200 verses that are alleged to encourage violence.”

Don’t look like there’s much truth to that statement, either.

First, it was “The Pig Snout” Swindle. Now… 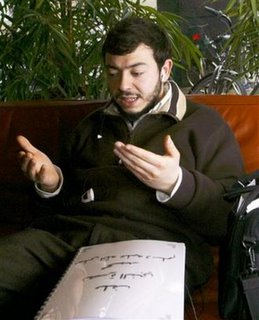 Imam Ahmed Akkari displays a pamphlet Wednesday Feb. 8, 2006 in Copenhagen, Denmark that he took to the Middle East last year. The Associated Press protested Wednesday the misleading inclusion of an AP photograph in the pamphlet purporting to show images offensive to Islam. The AP picture within the pamphlet shows a bearded man wearing fake pig ears, a pig nose, and a pink embroidered cap on his head. He was wearing the costume while participating in a pig-squealing contest at an annual festival in a farm village in southern France last summer. The cover reads ‘The Case of the Prophet Muhammad.’ (AP Photo/John McConnico)

In early December, the group’s first delegation of Danish Muslims flew to Cairo, where they met with the grand mufti, Muhammad Sayid Tantawy, Foreign Minister Ahmed Aboul Gheit and Amr Moussa, the head of the Arab League.

“After that, there was a certain response,” Mr. Akkari said, adding that the Cairo government and the Arab League both summoned the Danish ambassador to Egypt for talks.

Mr. Akkari denies that the group had meant to misinform, but concedes that there were misunderstandings along the way.

In Cairo, for example, the group also met with journalists from Egypt’s media. During a news conference, they spoke about a proposal from the far-right Danish People’s Party to ban the Koran in Denmark because of some 200 verses that are alleged to encourage violence.

Several newspapers then ran articles claiming that Denmark planned to issue a censored version of the Koran.

Akkari told his audience in Egypt that “the far-right Danish People’s Party proposed to ban the Koran in Denmark.”

Knowing what we know about the sacredness of the Koran, this was no small statement!

People have died over Koran desecration before!

But, it is also not true.

Although, since 9-11 the Danish immigration system has become much tighter, although some claim the new policies to be discriminative towards Muslims, although the Danes were outraged when Mufti Shahid Mehdi stated in a televised interview that women who do not wear headscarves are “asking for rape”, there is no readily available information that the far-right Danish People’s Party, the third most powerful political bloc in Denmark, has ever proposed to “ban the Koran” in Denmark. In fact if it was even spoken by a right winger, the news was not widely reported. You would think that would make the papers!

Michelle Malkin earlier reported on the manufacturing of the Cartoon Jihad with video of Ahmed Akkari talking in circles. Hopefully, the innocent looking spokesman for the Islamic Society of Denmark will be asked about this in his next interview.

Betsy has Amir Taheri‘s detailed description of the Danish imam’s tour of the Mideast,… a very interesting read.