A new pathetic low for the Democratic Party!

After five years of Bush McHitlerburtonism in the White House absent of any frog marching, and still without “a plan”… And, with unemplyment at 4.9% (Oops! 4.7%), the economy rolling, the stock market up, wins in the War on Terror, progress in Iraq, and democracy breaking out all over the planet, about all you can whimper is “We can do better”…

Or, you can do what Democrats do best, Bush Bash! Yeoarraaah!

The DNC along with Julian Bond from the NAACP this year are celebrating Black History Month much like they did the King Holiday by escalating the Bush Bashing.

But, the DNC website takes Bush Bashing to a Whole New Low!!!

Today, if you go to the DNC home page and click on the picture of “Dr. Martin Luther King Jr.” it brings you to a Bush Bash Ad!! 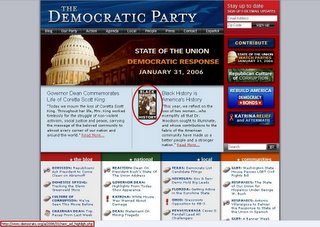 HERE is the ad.

Democrats will be airing this Bush Bash Ad in Nevada this weekend where it looks like Harry Reid needs the light to shine somewhere else instead of his own party’s meltdown. 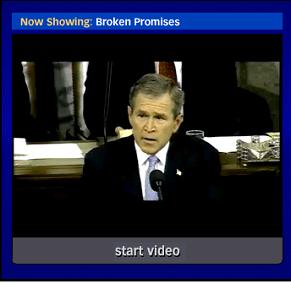 (Here is the source view of the page showing the link.)

Things are not looking so rosy for the Minority Leader when Harry Reid’s dirt makes “Jack Abramoff’s lobbying work look like that of a rank amateur”:

Going into the mid-term elections with a two-term president of the opposite party should be a golden opportunity for Democrats, notes DeBrecht, but instead there are signs of strife as attempts by liberal senators to stop the Alito nomination fell flat while the party’s congressional leadership seems destined to clash with its national chairman.

“To make matters even worse, the Democratic National Committee is nearly broke,” says DeBrecht, “while the Republicans have millions in the bank. When Howard Dean won the chairmanship everyone thought he’d be able to raise truck loads of money from his online supporters and the MoveOn.org crowd, but instead he’s facing a rebellion from Democrats in Congress who are worried about his mismanagement.”

Dean seems unlikely to take the rebellion lying down, though. Reports have surfaced that the former Vermont governor has prepared a Nixonian response by digging up dirt on Harry Reid, the Democrat’s leader in the Senate. One DNC source is quoted in media reports as ominously saying that Dean’s secret evidence on dealings by the Senator from Nevada makes “Jack Abramoff’s lobbying work look like that of a rank amateur.”

The truth that Blacks and minorities have made tremendous strides these last few years (with more good news today) may never be told… But, the attack and link on the DNC website is just pathetic!

GOP Bloggers has more bad news for Harry Reid. They better role the Bush Bash ad for another week!

And, yet, more trouble for Harry Reid.

Arizona’s Legislature Passes Law Against Democrats’ ‘Corrupt Politician’s Act (HR1)’ – “Shut Up, Sit Down and Keep Your Hands Off Our Elections”