Maybe they should have stuck with a triple toe loop? Just an observation.

Seriously, though… What an unforgettable Olympic Moment!

After crashing HARD on the ice after a throw in the Pairs Skating Finals, the young Chinese skater limped over to the rink’s edge crying. But, after a short check on her condition, she skated back on the ice and the Chinese pair courageously finished their skate. 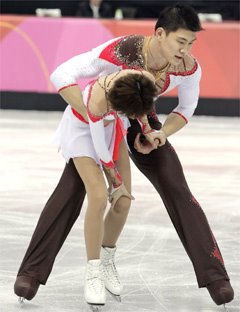 China’s Zhang Hao helps his partner Zhang Dan after she fell during their routine in the Pairs figure skating finals at the Turin 2006 Winter Olympic Games in Turin, Italy, Monday. Zhang Dan fell while attempting a throw quad solchow and had to stop their routine. (AP Photo/Kevork Djansezian)

The Russians had a horrible spill of their own a couple of years ago but came back and won the gold medal tonight. It’s these kind of stories, like the unforgettable moments from the past, that make the Olympics the world’s premier sporting event.

Oh, and the American women went 1-2 in the Halfpipe. That was cool!