DJ Drummond at Polipundit gives his perspective on the UAE ports deal.
I agree.

“You can’t win a war against radical Islam without rewarding and supporting the moderate silent majority.” 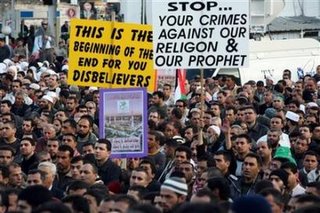 The alternative is too dangerous!

The UAE held elections this past year and has made serious steps towards democracy and improving womens rights. The UAE also scrapped its “Ministry of Information” which used to control the media. And, the UAE announced in December that “democracy” will start being taught in the first grade!

These are obviously good signs.

And, it should not matter what company is managing the ports. If the right systems are in place, security issues should already be taken care of.

Today the UAE annunced that it would delay the deal on the seaports.

You don’t see many protests like this in many of the Muslim Countries where the protesters are asking for “dialogue”. At least, the Western media does not show it. That is exactly the reason that the silent majority of Muslims need to be empowered so that voices of moderation can be heard over the threats. 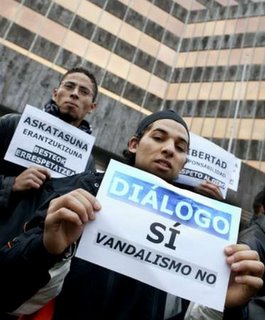 A member of the Assabil Islamic centre carries a sign reading ‘Dialogue yes, Vandalism no’ in Bilbao, northern Spain, February 11,2006, during a protest against cartoons depicting the prophet Mohammed, published in various European newspapers. Association members carried printed signs in favour of dialogue, and against ‘Insults’, ‘Violence’, and ‘Vandalism’. (REUTERS/Vincent West)

Update: (Saturday 2-25) Glenn Reynolds has excellent commentary on the selling of the ports posted at today’s Wall Street Journal. This struck me:

Some bloggers, meanwhile, were having second thoughts. One of them was me: Although my initial reaction was negative, I started getting emails from readers — some of them longtime correspondents — who had experience with the UAE. One had served alongside troops from the Emirates in Afghanistan; another had spent time in Dubai. Some had worked with UAE ports officials. All were positive.

Then Jim Dunnigan of StrategyPage explained why the UAE has been a good friend to the U.S. and is likely to be trustworthy here, and why this deal is in American interests. I found it pretty convincing. A lot of other bloggers, of all political persuasions, were reaching the same conclusion, even as the mass-media and talk-radio hysteria was still building. (To be fair, some Big Media like The Wall Street Journal and the Washington Post were weighing in with good sense.) As the National Journal’s Blogometer reported, “This movement was generally led by the intellectual right, and the intellectual left soon found itself in guarded agreement — the deal wasn’t as bad as it first seemed.”

Freedom for Egyptians writes about the UAE port deal.

Earlier, she wrote about Condi’s disappointing visit to Egypt this week.