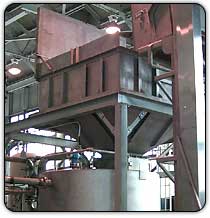 A new technology has been used in Missouri to change turkey guts, bones and feathers into oil. In fact a plant has been in operation in Carthage, Missouri using the TDP process to manufacture oil:

The company uses a process called thermo-depolymerization (TDP). TDP means that waste—like turkey guts—is ground up and mixed with water. The mixture is then heated to 500 degrees Fahrenheit (260 degrees Celsius)—more than twice as hot as boiling water!

The heated mixture is then compressed and cooked again. Eventually, this process turns the turkey guts into oil and other substances.

CWT built a factory in Missouri, where it hopes to turn 200 tons of turkey guts into 500 barrels of oil a day.

However, there are still a few minor glitches that need to be ironed out:

Missouri’s governor has ordered a temporary halt to the operation of a ConAgra-backed plant that turns turkey byproducts into fuel oil.

Omaha-based ConAgra Foods had been a partner for about five years with Changing World Technologies of West Hempstead, N.Y., in the waste-to-oil business Renewable Environmental Solutions, which built the plant in Carthage, Mo.

ConAgra’s nearby Butterball turkey processing plant continues to supply RES with the waste material for transforming up to 270 tons of feathers, bones, blood and guts into 300 barrels of oil a day.

It’s too bad about that Fowl Odor! (Sorry, I couldn’t resist)

Wilsonizer researched the US dependence on oil and achieving energy dependence and sent in this report.