Where are all the naked protesters from PETA when you need them? 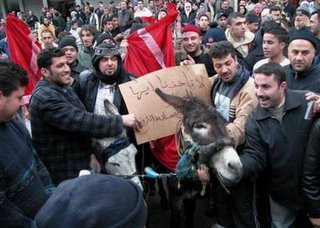 Lebanese Muslim demonstrators gather around two donkeys draped with Danish national flags during a protest against the publication of offensive newspaper cartoons of Islam’s Prophet Muhammad, in the northern city of Tripoli, Lebanon, Friday, Feb. 3, 2006. Protest marches were organized after Friday prayers in Lebanon, calling for cutting off diplomatic relations with countries where papers published prophet drawings. Writing on the banner reads “Excuse us donkey we will liken you to the Norwegian press.” (AP Photo)

A New Zealand newspaper joined in the ‘battle between freedom of speech and religion’ on Saturday, publishing the cartoons of the Islamic prophet Mohammed.

Irish paper, The Star, defended its decision to print cartoons.

A Jordanian paper, the Arabic Shihan, boldly published the cartoons. 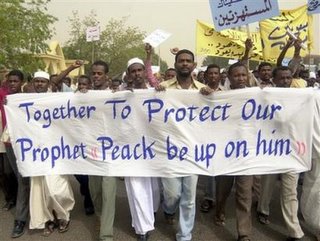 Peack be with you!
And, Peack be up on you also, my brother.

Up to 300 hardline Islamist activists shouting “Allahu Akbar” (God is Greatest), went on the rampage in the lobby of a Jakarta building housing the Danish embassy.

Iranian anger grows over the cartoons.

Palestinian gunmen kidnapped and later released a German(?) over the cartoon row.

A Danish Muslim demanded that the current law be changed!

Even the kid knows this is goofy.
Let me guess… You’re going to torch the Red Dane. Right? 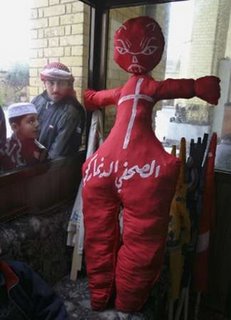 An Iraqi boy looks at a Danish effigy(?) in a room beside a mosque before the start of a protest against cartoons depicting Prophet Mohammad, published in several European newspapers, in Baghdad February 3, 2006. Muslim anger erupted across the Middle East after Friday prayers, as crowds emerged from mosques burning European flags and vowing revenge for ‘blasphemous’ cartoons of the Prophet Mohammad printed in European newspapers. The Arabic words on the effigy read, ‘Danish Journalist’. (REUTERS/Namir Noor-Eldeen)

The Vatican enters the fray:

Cardinal Achillee Silvestrini of the Vatican told the Italian newspaper, Corriere della Sera today that the act of ridiculing religious symbols is an abuse of freedom.

He said the Western world should establish a limit to its claim of freedom as an absolute value. The habit and idea of referring to religious symbols should be fought in Europe as well.

Afghanistan’s President Hamid Karzai on Friday termed the publication of Muslim Prophet’s cartoon in some European countries as an insult to Islam.

Dang! All that good French appeasement down the drain! 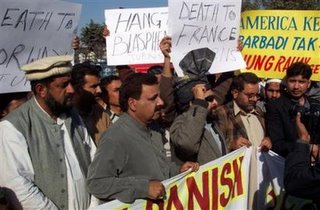 Pakistani protesters rally to condemn the publication of cartoons of Prophet Muhammad in Denmark and France in Lahore, Pakistan, Friday, Feb. 3, 2006. Pakistan’s parliament passed unanimously a resolution condemning cartoons of Islam’s prophet in European newspapers, and small protests were held in major cities as anger grew in this Islamic nation. Placard on top reads ‘war will continue till U.S. destruction’. (AP Photo/K.M.Chaudary)

Michelle Malkin has much, much, much more.
Slapstick offers advice.
Little Green Footballs has a number of updates on today’s protests.