Anger grows over the Muhammad and Islam cartoons in the Muslim world… that were published in September, ’05:

Protests escalated across the Muslim world over the publication in Europe of cartoons of the Prophet Muhammad. The drawings, first printed in Denmark, sparked a fresh row when they were re-run in several papers, leading to the sacking of a French editor. Hundreds demonstrated in Pakistan on Thursday, chanting “Death to Denmark” and burning Danish and French flags. But one Jordanian paper has reprinted the cartoons, with an editorial urging Muslims worldwide to “be reasonable”. Palestinian gunmen briefly surrounded EU offices in Gaza to demand an apology over the cartoons.

One report suggested that:

“Islam bans any depiction of Muhammad or Allah, in case they lead to idolatry.”
BBC 2-2-2006

Yet, this wasn’t the first time that cartoons were published of Muhammad. In 2002 this cartoon was published in the US… 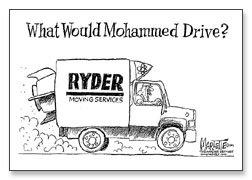 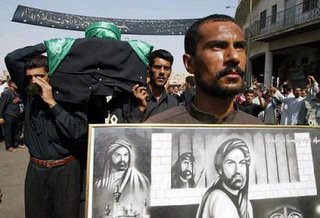 This illustration was paraded at an Islamic funeral recently. 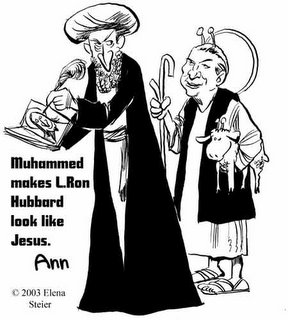 This US cartoon was published in 2003.

This painting is titled “Islam-i-bomb” 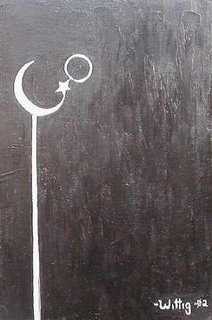 The symbol of Islam itself, with yet another stupid grenade pin protruding from it… 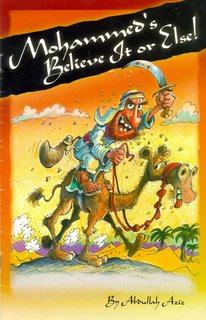 Here is a picture from a 23 Page full color comic book of illustrations on Islam’s unusual beliefs taught by Mohammed…….You have to see this to believe it. By Abdullah Aziz. 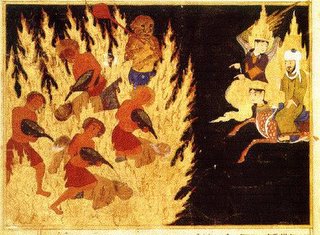 And, this ancient painting shows Muhammad’s trip in which he is shown sinners suffering in hell. This level of hell shows people who had cheated orphans. Muhammad is guided by the Archangel Gabriel and rides on a deer-like creature with the head of a woman, named Buraq. Here one sees a rare painting in which Muhammad’s face is not veiled.