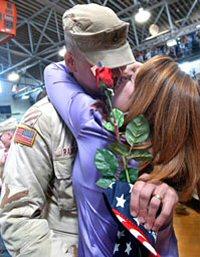 Staff Sgt. Greg Ramsey gets a big hug and kiss from his wife, Kelly, as his unit is dismissed.

As members of the C Company, 2-123rd field artillery made their way into the Mount Vernon Township High School gymnasium with a bagpipe marching band leading them in to “The Army Goes Rolling Along,” Kelly Ramsey stood on top of the bleachers.

Her hands were at her lips and as soon as she spotted Greg in the crowd of 128 soldiers filing in, she started pointing and waving with tears running down her face.

Then commanders of the soldiers uttered the two magic words… “Company dismissed!”

Children lined the streets of Mount Vernon to welcome home their heroes. 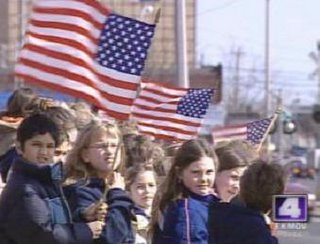 Another small town in America welcomed home its heroes from Iraq yesterday.

Some 120 members of an Army National Guard unit are back home in southern Illinois, and a community has made it known they’re happy to have them back.

The members of the C Company, 123rd field artillery unit flew in this morning to St. Louis, then were driven to Mount Vernon. There, they were escorted by police and fire trucks to the city’s high school gymnasium, where at least two-thousand people gathered for a welcoming ceremony.

The event — kept brief to let the soldiers reunite with their families — included a bagpipe rendition of “Amazing Grace” and short remarks from dignitaries.

The unit was called to active duty in December 2004, were dispatched to Iraq and returned to Fort Dix, New Jersey on January 21st.