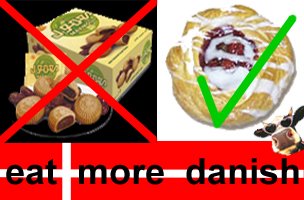 If Denmark resigned to the war launched by Muslim Arabs to receive apology from the government of Denmark, I am sorry to say that Denmark will simply be saying we do not believe in what we stand for. Denmark will be sending the message that we apply freedom of expression but we do not really believe in it.

Denmark will be sending the message around the world that Arab citizens who are ruled by the one party, president for life regimes are imposing their lack of freedom on the free world, hence the prevailance of the culture of oppression, tyranny and ideologies of hatred

Sandmonkey is brilliant and entertaining as usual…

Even though the Danes have apologized repeatedly for offending muslims by having a cartoon of the Prophet, the muslim world seems to be enjoying its “newfound power” and relishing in its “victory” in appearing retarded and is refusing to end the boycott against danish products. People at the comment section in the Arabiya story have not only vowed to never stop boycotting Denmark, but called for boycotting Norway and any other european country that may follow suit (A newspaper in France, feeling the need to have Paris torched again, just reprinted them cartoons) . But so far it has only been the Danes and their products that have taken the brunt of muslim anger worldwide…

See ladies and gentlemen, this is what’s drawing this region backwards into the abyss of stupidity and irrationality. We invoke religion in everything. We see everything through the prism of religion. Our false religiosity that lacks the power of our God-given mind has crippled our ability to rationalize and make sound judgements and come up with reasonable conclusions. Katrina becomes God’s judgement on America while Pakistan’s earth quake had killed far more people. The Tsunami becomes God’s punishment for the sex industry in Thailand while most of the dead were Muslim Indonesians. The US invasion of Iraq becomes America’s war on Islam while the ones who are ramming suicide car bombs into Shia mosques are fellow Sunnis. And the list goes on and on.

I can to an extent understand why some people may feel insulted by the cartoons, but at times like these I like to recall the adage: “Sticks and stones may break my bones, but cartoons will never hurt me”… or something like that I think. Even more appropriate is a lesser known adage: “Better to concentrate your efforts on developing education, economic infrastructure, protecting human rights, and engendering genuine democracy and social equity at home than to wage Jihad against Danish cartoons.”

This was taken from a Middle East webpage. 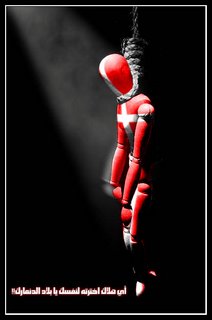 Via Chanad Bahraini… One banner reads “Oh you who love Mohammed the Prophet of Allah, boycott Danish products”

But, Chan’ad Bahraini refuses to give up his Danish toys.

Moroccan blogger, “Or Does It Explode?” is focusing on more pressing issues.

France, Germany, Spain and Italy have reprinted the cartoons today.
Cox and Forkum sees an image problem.
Slapstick thinks the furor is not funny.