It’s too bad that Yu Dongyue has lost his mind from his many beatings.

Reaching for the heavens… 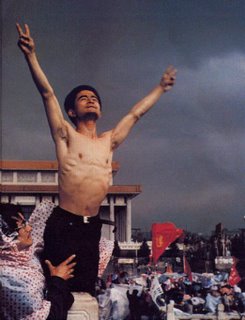 A Chinese journalist arrested 16 years ago for throwing paint at a portrait of Mao Zedong will be going home soon:

The release of Yu Dongyue, 38, from more than 16 years in prison would leave about 70 Chinese political prisoners still serving time for their roles in the student-led demonstrations for democracy crushed by the army on June 4, 1989, the human rights watchdog Dui Hua Foundation said.

Yu Dongyue was sentenced to 20 years in prison for hurling emptied eggshells containing red paint at Mao’s giant portrait which hangs over the entrance to the Forbidden City, once the home of China’s emperors, and overlooks Tiananmen Square, at the height of the demonstrations on May 23, 1989.

China has in the past freed political prisoners ahead of major state visits.

Yu’s mother, Wu Pinghua, 56, said by telephone local officials had told her that she should wait at her home in Shegang in the southern province of Hunan for her son’s return.

“He hasn’t come home for 17 years. I’m very happy … but he’s mentally ill and it will be a burden to take care of him,” the mother told Reuters, speaking with a heavy Hunan accent.

Yu Dongyue, 38, a former journalist and art critic with Hunan’s Liuyang News, was incomprehensible and did not recognise his mother during her last prison visit in late 2004. The authorities had rejected applications for his medical parole.

A colleague who was sentenced to 16 years in prison, Lu Decheng, is now in Thai police custody after fleeing China in 2004 while on parole, to try to drum up support for the release of Yu, who rights groups say suffered a mental breakdown after persistent prison beatings.

As China’s hope for a democratic society lingers, nearly half of the South Korean youth say they would support the North Koreans if the US attacked the communist nation.