After his shameful attacks on the president at the King Funeral this past week, Jimmy Carter and His Son Jack both repeated the attacks on the Bush Administration’s spying program at Jack’s senatorial campaign kickoff. Now, more information comes out on the truth of Jimmy and Jack Carter’s attacks and it doesn’t look like the father and son combo are being quite honest.

Here is video of Jack Carter following in his father’s footsteps by attacking President Bush for spying, something his father did as well,
VIDEO HERE (KLAS Las Vegas)

Like Father, Like Son,… Jimmy shows his son the ropes this week at his son’s campaign kick-off by attacking the president for something he also did. His son joins him. 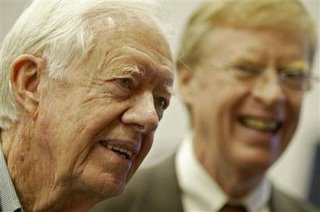 Former President Jimmy Carter, left, is seen with his son Jack Carter, during a campaign kickoff in Henderson, Nev., on Monday, Feb. 6, 2006. Jack Carter announced Monday that he will run as a Democrat for the U.S. Senate representing Nevada. (AP Photo/Jae C. Hong)

The Washington Times today reports more on the hypocrisy of Jimmy Carter, America’s biggest failure as president in and out of office. Here is the latest on his utterly shameful attacks on a real Americam hero, George W. Bush:

“Under the Bush administration, there’s been a disgraceful and illegal decision — we’re not going to the let the judges or the Congress or anyone else know that we’re spying on the American people,” Mr. Carter said Monday in Nevada when his son Jack announced his Senate campaign.

“And no one knows how many innocent Americans have had their privacy violated under this secret act,” he said.

The next day at Mrs. King’s high-profile funeral, Mr. Carter evoked a comparison to the Bush policy when referring to the “secret government wiretapping” of civil rights leader Martin Luther King.

But in 1977, Mr. Carter and his attorney general, Griffin B. Bell, authorized warrantless electronic surveillance used in the conviction of two men for spying on behalf of Vietnam.

Not only does Jimmy Carter betray his hypocrisy here, but his Attorney General told Congress when it debated the FISA law in 1978 that FISA would not impede the president from exercising precisely this power under the Constitution. The Times also notes that Jamie Gorelick said much the same thing in 1994. In any case, the appellate court certainly agreed with both Bell and Carter in 1980, even after passage of FISA the year after the surveillance took place.

In his performance at Mrs. King’s funeral this week, the execrable Jimmy Carter obviously chided President Bush by reference to the “secret government wiretapping” of Martin Luther King. In today’s Washington Times, Charles Hurt recalls that it was of course Jimmy Carter himself (and Attorney General Bell) who authorized the warrantless surveillance involved in the Truong case.

Jimmy Carter repeated his dishonest attacks on George Bush later in the week at his son’s Senatorial Campaign kickoff in Nevada. So did his son Jack. It is sad, though, that there are those on the Left who just can’t accept the truth about Jimmy on this matter as you can see from earlier comments on this subject HERE.

Hmm,… Could it be that a few conservatives are SICK of this man’s disrespect of the sitting President?!!