As the mullahs in Iran continue to threaten, the good people of Nevada are reminded of the failed policy’s of Jimmy, as they take a look at Jack. 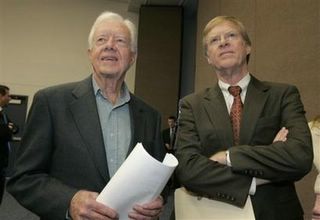 Former President Jimmy Carter, left, is seen with his son Jack, right, during a campaign kickoff in Henderson, Nev., on Monday, Feb. 6, 2006. Jack Carter announced Monday that he will run as a Democrat for the U.S. Senate representing Nevada. (AP Photo/Jae C. Hong)

In setting a fine example for his Son Jack’s Senatorial campaign kickoff, Jimmy Carter shows the young’un what he does best by blasting President Bush while continuing the democratic romance with Al Qaeda:

“Under the Bush administration, there’s been a disgraceful and illegal decision — we’re not going to the let the judges or the Congress or anyone else know that we’re spying on the American people,” Carter told reporters. “And no one knows how many innocent Americans have had their privacy violated under this secret act.”

Carter made the remarks at a union hall near Las Vegas, where his oldest son, Jack Carter, announced his candidacy for the U.S. Senate.

The former president also rebuked Attorney General Alberto Gonzales for telling Congress that the spying program is authorized under Article 2 of the Constitution and does not violate the 1978 Foreign Intelligence Surveillance Act passed during Carter’s administration. Gonzales made the assertions in testimony before the Senate Judiciary Committee, which began investigating the eavesdropping program Monday.

“It’s a ridiculous argument, not only bad, it’s ridiculous. Obviously, the attorney general who said it’s all right to torture prisoners and so forth is going to support the person who put him in office. But he’s a very partisan attorney general and there’s no doubt that he would say that,” Carter said. “I hope that eventually the case will go to the Supreme Court. I have no doubt that when it’s over, the Supreme Court will rule that Bush has violated the law.”

But, a quick glance back at the failed Carter years and you see that, (not that you can blame him), Jimmy has selective recall about his years in the White House:

We told you earlier that President Clinton had defended his executive authority to perform wiretaps and searches of American citizens without a warrant and in fact, in February of 1995, authorized the attorney general “to approve physical searches, without a court order, to acquire foreign intelligence information.”

Now it turns out that presidents going back to Jimmy Carter have authorized such actions. An executive order signed by President Carter in May of 1979 reads, “The attorney general is authorized to approve electronic surveillance to acquire foreign intelligence information without a court order.”

One reporter at the event asked an interesting question of the ex-president:

His father did not speak to the crowd during the event, afterward he addressed whether unpopular decisions he made while president will affect his son. “Jack is going to have to take the downside from doubtful Nevadans — I’m not going to vote for him because I don’t like something Jimmy Carter did 25 years ago.”

There were no reports of Ethiopian protesters at yesterday’s event.