Jimmy Carter Backs Hamas, Accuses US of Torture at Gitmo

Jimmy pushes the far-left agenda as he matter of factly claims US “torture” at Gitmo as he begs to give the Hamas terrorist organization a chance. 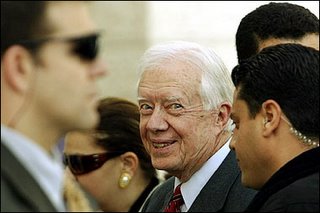 Former US president Jimmy Carter arrives to the West Bank city of Ramallah, January 2006. Carter called the cutoff of international funds to the Palestinians “counterproductive” and said the US should direct its aid through the United Nations and NGOs.(AFP/File/Pedro Ugarte)

After pushing for continued funding to the terrorist organization Hamas on CNN’s Situation Room, Jimmy Carter accused US soldiers of torture and oppression at Guantanamo:

BLITZER: We don’t have a lot of time, but I want to go through a couple of issues with you before I let you go, Mr. President. The Guantanamo Bay prison. The U.N. is now suggesting, a report at the U.N., the U.S. should shut it down as quickly as possible. Do you agree?

CARTER: I’ve agreed with that since we first found out that torture and oppression was being perpetrated against the prisons at Guantanamo Bay. These are people that have been arrested, taken on the battlefield. I understand most of them in Afghanistan.

They’ve never been given a right to hear the charges against them. They’ve never had legal counsel. They have not been permitted to meet with their families. They have been held incommunicado. And all the evidence is that many of them have been psychologically and physically tortured.

So the best thing that the United States can do for our own reputation and for justice in the world and for the honoring of human rights is to shut down Guantanamo Bay prison, as was recommended by the United Nations.

It’s almost humorous the way this man thinks… if it weren’t so dangerous. How he can believe that a group formed only to complete Israel’s destruction should be funded is really a strange and dangerous way of thinking.

Free Thoughts has more on Jimmy.