Here is more proof that it is way past time that the US can depend on the Chavista Regime.

The man continued to ramp up the rhetoric yesterday…

On Thursday, February 9, 2006, Venezuela promised to keep the oil flowing to the United States: 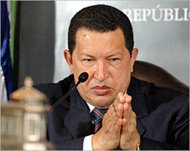 Venezuela has pledged to keep supplying oil to the United States despite a growing diplomatic row that has included the expulsion of envoys in recent days.

Bernardo Alvarez, the Venezuelan ambassador in Washington, said on Thursday: “We are – and we are going to be – a reliable source of oil for the world, including the United States.” 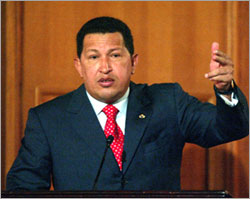 Hugo Chavez, the Venezuelan president, has threatened to cut off oil supplies to the United States if Washington continues trying to destabilise his government.

“The US government should know that if they cross the line they will not have any Venezuelan oil,” Chavez said at a public event on Friday.

“I have started taking measures in that respect, I’m not going to say what.”

Venezuela, the world’s fifth-biggest oil exporter, supplies about 15% of US energy imports.

Chavez’s statements came a day after Condoleezza Rice, the US secretary of state, said that the Venezuelan government posed “one of the biggest problems” in the region and that its ties to Cuba were “particularly dangerous” to democracy in Latin America.

There is no word on how this will affect the New Yorkers who are getting the special cut rates on their oil from Chavez as half of Venezuela lives in poverty.

If you are not aware of the Kangaroo-Burmese style court going on in Venezuela today, please read up on how the Democratic leaders are being unfairly tried here, here, here and here.