If publishing Muhammad cartoons is now out of the question in Western Civilization due to death threats, indictments and risk of business closure,…

What can one expect from publishing pictures of Spaniards setting the prophet ablaze?

Will these pictures also bring about rioting, church burnings and Christian slaughtering?

An effigy of Muhammad before the Spaniards torched him. 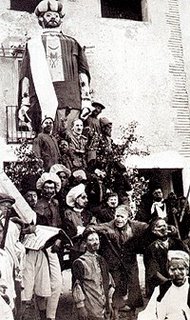 Freedom for Egyptians has the scoop on this amazing story.