One US Soldier in Iraq was not about to “Play Pretend” with Hillary!

Hillary Clinton (D-NY) has already started her 2008 presidential campaign by aligning herself with the military and pretending to be tough on terror.

This week in an attempt to look strong on terror, several liberal democrats including Hillary Clinton attacked the Bush Administration for the UAE ports deal and for failing to approach the 9-11 Commission for advice on the deal.

Fortunately, the ultra-liberal Hillary has yet to brainwash all of the voting public in to believing that her symbolism is really substance. Many military folk have never forgotten that her husband and co-president for eight years had written: ” I loathe the military.”

And, some military folk are not willing to play the game… 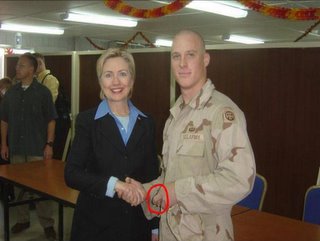 This US soldier flashed the “coercion” sign with his left hand when he met Senator Clinton while serving in Iraq in 2003.

The picture shows that this soldier has been through Survival School and learned his lessons well. He’s giving the sign of “coercion” with his left hand. These hand signs are taught in survival school to be used by POW’s as a method of posing messages back to our intelligence services who may view the photo or video. This guy was obviously being coerced into shaking hands with Hillary Clinton.

It’s ironic how little she knew that he would so inform us about the photo—perhaps because she’s never understood our military to begin with.

After his discharge from the Army, the soldier posted a personal profile on Yahoo Personals as part of looking for introductions to single females.

In his profile, he includes the picture with Hillary and explains “The picture of me and Hillary Clinton was taken when she came to visit Iraq. I was actually ordered to shake her hand, and I never figured that my friends would circulate it all over the net. I AM NOT a Hillary fan by any stretch.”

He did intentionally cross his fingers during the handshake and it did mean that he was not thrilled to shake Senator Clinton’s hand.

Tammy Bruce is also aware of the benefits of survival school.