“Now these choices reveal a disheartening pattern of the ideology, influence and incompetence that we have seen. And, they violate our values and our interests. Now, I don’t claim that democrats are always right but we are far more likely to make choices that reflect the values and advance the well being of the American people.”

After that “value violation” tirade, why did the media not ask Hillary about the Saudi run US ports?

As Sweetness and Light pointed out, the National Shipping Company of Saudi Arabia (NSCSA) already runs 9 ports here in the US! 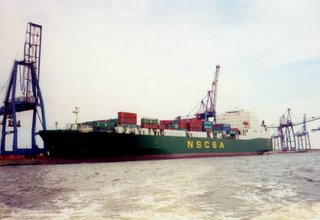 And, it was back in 1997, when Hillary was serving as co-president, that the Saudi owned shipping company (NSCSA) began service between North America and Italy, Greece and Turkey?

This just proves that the Clintons have evolved a long way since 1999 when they claimed that port control was “silly stuff”.

Back in 1999 when a Chinese owned Hutchinson-Whampoa, Ltd. took control of ports at both ends of the Panama Canal the Clinton White House scoffed at the security risks:

Back when port control was “silly stuff”…

The Clintons watched as China became gate keepers at both ends of the Panama Canal.

Jim Geraghty at TKS has a must read on the disinformation campaign about the UAE port management deal today:

AN ORGANIZED DISINFORMATION CAMPAIGN ON THE PORT DEAL

Generation Why? has thoughts on the ports deal.
Powerline reports on the “Sound and Fury” of the UAE port controversy.
Jamie Allman has a bit of advice for President Bush.