Russia invited Hamas for talks saying that Russia never considered the group a terrorist organization as Hamas refuses to recognize Israel or to put down arms,
VIDEO HERE
(Reuters)

Well, the French certainly don’t surprise much with this move. 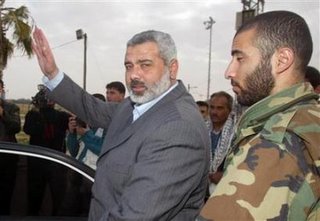 French government has backed the decision of the Russian president Vladimir Putin to invite leaders of the Palestinian militant group Hamas to Moscow.

On Thursday, Putin said that “Russia is maintaining contacts with the Hamas organization and intends in the near future to invite the leadership of this organization to Moscow.”

On Friday, the Russian Defense Minister Sergei Ivanov said that Russia would use a planned meeting with Hamas representatives to urge recognition of Israel and support for Middle East peace.

Israel criticized Putin’s decision saying it undercut international pressure on the militant group to recognize the Jewish state and to renounce violence after its election victory.

Meanwhile, Islamic Jihad was out recruiting in Gaza. 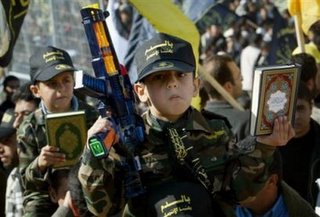 A Palestinian boys hold the Quran, Islam’s Holy book, and, one of them, a toy gun during a demonstration held by the Islamic Jihad movement in Gaza City, Friday Feb. 10, 2006. A top Islamic Jihad leader, criticized the kidnapping Thursday of an Egyptian diplomat in Gaza City, saying those behind the ‘criminal’ attack did not represent the Palestinians. (AP Photo/Adel Hana)