Fears of WMD Are "Ricin" in Texas

Update: (5:00 Sunday PM CST) The FBI just confirmed that the powdery substance found in a roll of quarters at a University of Texas dormitory was not the potentially deadly poison ricin.

At least Texas kept its sense of humor during this ordeal. The ricin incident did not seem to affect morale this weekend on campus or at the Big 12 basketball game. 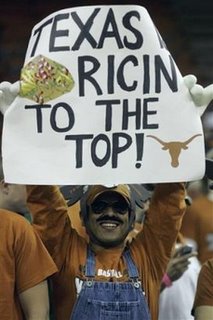 Mario Sanchez, a senior mechanical engineering major at the University of Texas, holds a sign in the crowd before the men’s college basketball game against Kansas Saturday, Feb. 25, 2006, in Austin, Texas. The sign alludes to a small quantity of ricin found by a Texas student, she says, in a roll of quarters that tested positive for the potentially deadly poison. (AP Photo/Harry Cabluck)

The preliminary tests were inconclusive for confirming ricin at the University of Texas:

Preliminary tests on the powder look for a protein that matches the profile of the poison ricin.

One test returned positive for that protein, one was inconclusive, and one was negative.

EMS officials say the subsequent tests, coupled with the lack of any symptoms from students, make them doubt the powder actually contained ricin.

The definitive test will come from the federal Centers for
Disease Control. Results are expected Sunday.

Check out Texas Rainmaker for updates.
Also, Michelle Malkin has been following the story.

HERE is a previous posting on the incident.

Prairie Pundit, from the heart of Texas, has more on the college student who found the substance while doing laundry.