Freedom for Egyptians also contributed to this story and explains Mona’s hypocrisy at her blog.

Mona Omar Attia… Preaches to the West on “Freedom of Speech” while working with the Imams in the back room.

Egyptian Ambassador to Denmark, Mona Omar Attia, met with the Danish Imams several times before their trips to the Middle East. 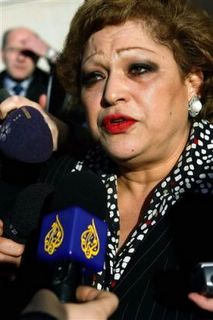 Ambassador from Egypt, Mona Omar Attia, is interviewed after a meeting between foreign diplomats including ambassadors from Muslim nations and the Danish government in Copenhagen, Denmark, Friday, Feb. 3, 2006. Egypt’s ambassador said Friday that Danish Prime Minister Anders Fogh Rasmussen’s response to the Muhammad drawings controversy has been inadequate, and that the country should do more to ‘appease the whole Muslim world.’ Mona Omar Attia said after a meeting with Fogh Rasmussen that she will urge diplomatic protests against the Scandinavian country to continue. (AP Photo/Polfoto, Tariq Mikkel Khan)

October 10, 2005: Jyllands-Posten starts getting threats on the internet from “The Glory Brigades in Northern Europe,” of “Bombs exploding over pictures of Danish daily Jyllands-Posten and blood flowing over the national flag and a map of Denmark.” The Glory Brigades have similarities with another internet group calling itself “Al-Queda’s Chapter in Northern Europe.”

October 17, 2005: As Freedom for Egyptians reported WITH PICTURES AS PROOF, the controversial cartoons are printed in the Egyptian Weekly, Al Fager.

October 31, 2005: This seems strange… After the pictures were already published in Egypt with no riots or Danish flag burning, Mona Attia threatens the Danish Government on December 22, 2005:

International Muslim organisations are to take over the discussion about whether a Danish newspaper was in its rights to print caricatures of the prophet Muhammad. After Rasmussen also refused to meet with the ambassadors, Egyptian Ambassador Mona Omar Attia said in a Danish news broadcast on Tuesday (12-20) that the group planned to meet to discuss contacting other parliamentary leaders, some of whom had urged the PM to hear the ambassador’s complaints.

After meeting at the Saudi Arabian Embassy on Wednesday, however, the group said they had decided to let international Muslim groups take over the cause, allowing groups such as the Organisation of the Islamic Conference to try to influence the prime minister. The conference represents 56 member states and has already sent a letter of protest to the government. ‘It’s out of our hands,’ said Attia after the meeting. ‘Now it is moving up to the international level. Therefore, we will not try to contact Denmark’s political leaders. ‘One could imagine that the Arab League will weigh in soon,’ she said.

December 8-10, 2005 Arab Summit in Mecca– Saudi Leader King Abdullah bin Abdul Aziz told reporters that Muslim leaders need to unite and tackle extremists who had ‘hijacked’ their religion… “It bleeds the heart of a believer to see how this glorious civilization has fallen from the height of glory to the ravine of frailty, and how its thoughts were hijacked by devilish and criminal gangs that spread havoc on earth.” But outside in the halls between meetings the talk was all about the Danish cartoons.

January 4, 2006 After news that the government would translate the prime ministers New Year’s address into Arabic and urged the Danish people to practice their right to freedom of speech without inciting hatred against Muslims or other minorities:

“It’s a positive step toward a dialogue, and I hope that my own and other Arabic governments will see it as a positive signal,” Attia told daily newspaper Politiken.

February 3, 2006 Egyptian Ambassador to Denmark Mona Omar Attia is back in the news:

Egypt’s ambassador in Copenhagen, Mona Omar Attia, highlighted the stalemate in comments after she heard Danish Prime Minister Anders Fogh Rasmussen say his government could not apologize for anything that Danish newspapers had printed.

“This means that the whole story will continue and that we are back to square one again. The government of Denmark has to do something to appease the Muslim world,” she said.

Also, February 3, 2006- Egyptian Ambassador Mona Omar Attia told if the Danish newspaper apologizes publically, the rage will calm. “The ball is in Denmark’s court right now,” Egyptian ambassador said. No country in the world, the ambassador added, could say that they do not interfere in media.

During the build up to the cartoon riots and death, it was rage that drove Ambassador Mona Attia to assist the terror-linked Danish Imam Abu Laban and the other radical Muslim clerics in their quest:

“Egypt’s embassy played a fundamental role,” he says. Egypt and other Arab regimes saw the furor as a good opportunity “to counteract pressure from the West” and “to show people they are good Muslims,” he says.

Ms. Attia, the ambassador, says she wasn’t motivated by political concerns but by personal outrage. “I was very angry. I was very upset,” she says, describing the cartoons as an unacceptable insult to all Muslims.

She acknowledges meeting with the Danish clerics several times but denies coordinating strategy with them.

A joint blog post by
Freedom for Egyptians
Gateway Pundit