MUST SEE VIDEO OF HARRY REID’S DENIALS…
“ANY MONEY I RECEIVED HAD NO FINGER PRINTS OF JACK ABRAMOFF ON IT.”
VIDEO HERE

Is Harry Reid teetering before a “Big Fall?” 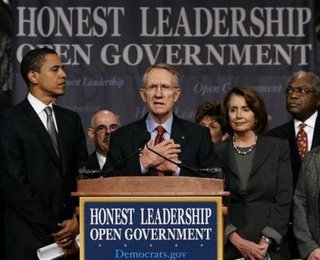 Clutching his hands to his heart Senate Democratic leader Harry Reid, D-Nev., (lays it on thick) calls for Republicans, to clean up the tainted relationship between lawmakers and lobbyists in the wake of the scandal involving former lobbyist Jack Abramoff at the Library of Congress in Washington Jan. 18, 2006. (AP)

– According to rules, The Library of Congress is off limits for political events. Harry Reid later apologized for unethical attacks in his ethics reform package.-

Senate Democratic Leader Harry Reid wrote at least four letters helpful to Indian tribes represented by Jack Abramoff, and the senator’s staff regularly had contact with the disgraced lobbyist’s team about legislation affecting other clients.
The activities _ detailed in billing records and correspondence obtained by The Associated Press _ are far more extensive than previously disclosed. They occurred over three years as Reid collected nearly $68,000 in donations from Abramoff’s firm, lobbying partners and clients.

Reid’s office acknowledged Thursday having “routine contacts” with Abramoff’s lobbying partners and intervening on some government matters _ such as blocking some tribal casinos _ in ways Abramoff’s clients might have deemed helpful. But it said none of his actions were affected by donations or done for Abramoff.

“All the actions that Senator Reid took were consistent with his long-held beliefs, such as not letting tribal casinos expand beyond reservations, and were taken to defend the interests of Nevada constituents,” spokesman Jim Manley said.

…Abramoff’s firm also hired one of Reid’s top legislative aides as a lobbyist. The aide later helped throw a fundraiser for Reid at Abramoff’s firm that raised donations from several of his lobbying partners.

And Reid’s longtime chief of staff accepted a free trip to Malaysia arranged by a consulting firm connected to Abramoff that recently has gained attention in the influence-peddling investigation that has gripped the Capitol.

Sen. Harry Reid of Nevada began receiving campaign contributions from at least four American Indian tribes only after they hired Jack Abramoff, Republicans charged this week in an effort to tie the Senate Democratic leader to the disgraced lobbyist.

On Thursday, Reid shrugged off questions about money he received from tribal clients of Abramoff, who pleaded guilty last month to three felonies after being accused of exchanging meals, travel and gifts for political favors.

“I’ve said that I received money from Indians in the past and will continue to do so,” Reid said.

Asked what he would say about tribes who did not give him money until after hiring Abramoff, Reid said, “What I’ve said all along.”

The National Republican Senatorial Committee this week revived a charge that Reid received more than $50,000 from four tribes with gaming interests between 2001 and 2004 after they hired Abramoff. The Nevadan had received no money from those tribes before then, Republicans said.

• $19,500 from the Agua Caliente Band of Cahuilla Indians of California.

• $7,000 from the Mississippi Band of Choctaw Indians.

• $19,000 from the Saginaw Chippewa Indian Tribe of Michigan.

“Harry Reid’s ties to Jack Abramoff are too substantial for him to dismiss with Washington, D.C., denial and hypocritical accusations,” Republican spokesman Tucker Bounds said.

They show Abramoff’s lobbying team billed for nearly two dozen contacts with Reid’s office in a single year to mostly discuss Democratic legislation that would have set the minimum hourly wage for the Northern Mariana Islands, an Abramoff client, initially almost $3 lower than other U.S. states and territories.

And in the midst of the contacts, Abramoff’s firm hired one of Reid’s top legislative aides to lobby for the tribal and Marianas clients. The aide then helped throw a fundraiser for Reid at Abramoff’s firm.

The activities — detailed in billing records and correspondence obtained by the Associated Press — are far more extensive than previously disclosed. They occurred over three years as Reid collected nearly $68,000 in donations from Abramoff’s firm, lobbying partners and clients.

Now, today the AP is reporting further on the links between Senator Reid’s office and an Abramoff ex-colleague:
Lobbyist Confirms Talks With Reid’s Office
February 12, 2006

One of Jack Abramoff’s ex-colleagues confirms he contacted Senate Democratic leader Harry Reid’s office on behalf of the influential lobbyist but says he does not believe Abramoff’s billing records accurately reflect the extent of his work.

Ronald Platt, a lobbyist who worked with Abramoff at the Greenberg Traurig firm between 2001 and 2004, said he contacted Reid’s office in 2001, as the billing records show, about the timing of minimum wage legislation affecting one of Abramoff’s clients, the Northern Mariana Islands.

“When Abramoff first arrived at Greenberg Traurig, I did a new colleague a favor by simply asking Reid staffers about when the minimum wage legislation affecting the Mariana Islands would be voted upon by the Senate. I commu
nicated this to Abramoff,” Platt said in a statement e-mailed Friday evening to The Associated Press.

The AP reported on Thursday that lobbying firm billing records obtained under public records law from the Marianas showed that Abramoff billed the islands for 21 contacts in 2001 with Reid’s office.

The records listed the minimum wage as the issue and Platt as the point of contact for most of those contacts. Platt had registered with the Senate in 2001 to lobby for the Marianas as well as for some Abramoff tribal clients.

Reid’s office confirmed this week it had “routine contact” with Platt over the years on lobbying issues such as the Marianas and American Indian tribes, but said it could not verify all the contacts listed in the billing records.