Imam Ahmad Abu Laban, the man behind this whole Danish cartoon controversy, not only faked obscene cartoons on his trip to the Middle East, but also:

* Entertained the “Blind Sheikh” behind the first World Trade Center attacks
* Praised Osama Bin Laden after 9-11 Attacks
* Preached he “Shed no tears” after 9-11 Attacks
* Accused of giving Political support to Osama bin Laden’s network
* Accused of giving Financial support to Osama bin Laden’s network
* Joined with 225 Islamic Radicals to form Global Jihadist Group in 2003
* Said that Theo van Gogh – “Had it coming!”
* Called on his flock to Give Their Lives to Global Jihad for Palestinians
* Met with Sheikh Qaradawi in Saudi Arabia who has legalized the murder of American soldiers in Iraq

Imam Ahmad Abu Laban, the leader of the Islamic Society of Denmark toured the Middle-East to “create awareness” about the 12 cartoons that were published in Danish newspaper, Jyllands-Posten, on September 30, 2005… 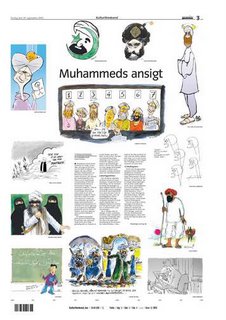 As far as most Western news services are concerned, the cartoons pictured above are the ones creating all of the uproar.

However, the truth is that Imam Ahmad Abu Laban, brought at least 3 additional images, which HAD NEVER been published in any media source. They included a cartoon of Muhammad as a pedophile demon, Muhammed with a pig snout, and a praying Muslim being raped by a dog. The drawings in Jyllands-Posten were harmless compared to these:

Evidently, the originals were not offensive enough for the trip!

The spokesman for the Islamic Society of Denmark, Ahmed Akkari, claimed he does not know the origin of the three pictures. He said they had been sent anonymously to Danish Muslims. However, when a reporter asked if it could talk to these Muslims, the spokesman refused to reveal their identity.

Abu Laban, who had previously been unwelcome in several Arab states, toured Egypt with fellow Islamic Society of Denmark representatives and spoke with representatives of the Arab League, Egypt’s grand mufti and other high-level officials. 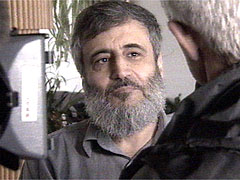 The spiritual leader of the global Islamic organisation, The Islamic Brotherhood, Qaradawi has his own TV programme on the Arabic channel Al-Jazeera. In a fatwa disseminated as part of his programme, Qaradawi has legalised the murder of American soldiers in Iraq, he supports the death penalty for homosexuality, he supports the right of Muslim men to beat their wives, says that suicide actions are the most exalted aspect of the Jihad for the Sake of Allah, and that women are required to engage in such a jihad side by side with their men.

In a Friday prayer a few days after the second attack on the World Trade Center on 11 September 2001 Abu Laban praised the Taliban as people who were trying to build a country in Afghanistan. (Kristeligt Dagblad 19 September 2001). He has also spoken highly of Osama bin Laden, who he has lauded for his ascetic life style.

On April 28th 2003, Abu Laban joined a forum of 225 Islamist clerics, scholars, and businessmen in Mekkah, Saudi Arabia to form a new body of supporters of global Jihad against the United States and the “Crusader” West:

The secretary General of the forum is the known Saudi Dr. Safar al-Hawali, who is regarded by many scholars as one of the main mentors of Osama bin Laden and leads the opposition to the U.S. military presence in the Arabian peninsula. A number of the founders are very popular among the generation of young supporters of Al-Qaeda in the Arab world. The forum might be an attempt to promote a political-ideological anti-Western struggle, as a result of the operational difficulties of Al-Qaeda to launch attacks against Western targets, as was expected from Al Qaeda following the start up of the War in Iraq.

In 1990 Abu Laban in his capacity as leader of The Islamic Community received “the blind sheik” Omar Abdul Rahman as his guest in Denmark. (Kristeligt Dagblad 19 September 2001. The sheik is now imprisoned in the US for 240 years for his part in the first World Trade Center bombing in 1993. 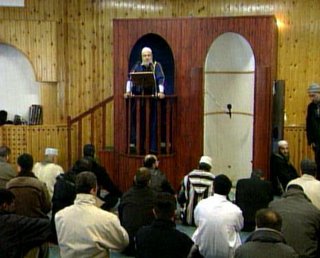 Moslems in Denmark joined the jubilant celebration of some American and ‘Palestinian’ Moslems as they took to the streets to celebrate the terrorist attacks in America. Convoys waved PLO flags and beeped their horns in celebration. In spite of local protests against the Islamic happiness, the Imam of Copenhagen, Mohamed Abu-Laban, said in his Friday sermon that he sheds no tears for the victims of the World Trade Center attack.

Abu Laban is accused of giving political and economic support to radical group that is part of Osama bin Laden’s network:

After 9/11 Rohan Gunaratna, the author of the book Inside Al Qaeda and affiliated with the prestigious Centre for Terrorism and Political Violence in Sct. Andrews, Scotland, characterised Ahmed Abu Laban as an Islamic extremist. He also accused him of giving political and economic su
pport to al-Gama’a al-Islamiyya, an Egyptian radical group that is part of Osama bin Laden’s network. Imam Abu Laban threatened Rohan Gunaratna with a lawsuit, but nothing seems to have come of it.

In April 2002, Abu Laban called on his flock to offer their lives in jihad for the Palestinian cause:

On 5 April Palestinian imam Ahmad Abu Laban called on his congregation at Friday prayers to offer their lives in a jihad for the Palestinian cause. Outside the mosque buses were waiting to take the congregants to a demonstration at Parliament Square, where they held up signs equating Judaism with Nazism, brandished a gun and burned the Israeli flag.

Freedom for Egyptians (who was interviewed by the BBC on Friday night) has a terrific post including this news: The Egyptian Al Fager newspaper a month ago printed the cartoons but only because of a radical Islamist living in Denmark who distributed those cartoons on Muslim embassies did the whole saga get started.

The media also refuses to report on the Muslim immigrants who are standing up against the the radical Islamists:

The Danish press has also paid very little attention to the representatives of a group of 80 immigrants who have expressed their support of Jyllands-Posten. A statement by the group placed on the internet carries the caption “We must condemn Islamist threats against free speech.” It goes on to accuse the Islamists of “viewing any criticism or any making fun of the Islamic religion as an affront and an insult to Muslims. In this way they want to prevent any human being from questioning the Islamic religion and its holy book and the prophet Muhammad. … With the same argument Islamic regimes and other forces in the Middle Eastern and Arabic countries have killed thousands of people and issued fatwas against authors, journalists and artists.”

Update: Cool! The Russian Pravda English has linked to this post.

Update: (Wednesday 2-8-06) Andrew Higgins in the Wall Street Journal is writing about the Terror Imams:

In this volatile environment, a group of Danish Islamic clerics angered by the cartoons succeeded in enlisting help from Egypt’s secular government, which has been struggling to contain a potent Islamist opposition. Secular forces in the Arab world, eager to burnish their image as defenders of Islam, provided an important initial impetus for the protests, but now are scrambling to control the fury.

From his office at the Islamic Faith Society in Copenhagen, Ahmed Abu-Laban, a fundamentalist Palestinian cleric, has been at the forefront of a campaign to force an apology from the paper. “This was the last drop in a cup of resentment, disappointment and exploitation,” he says.

In Aarhus, Denmark’s second-largest city, a radical cleric gave an interview denouncing Mr. Rose and reminding him of “what happened” to Theo Van Gogh, a Dutch filmmaker murdered in 2004 by a Dutchman of Moroccan descent. Mr. Rose got a security briefing from police and had his telephone number and address de-listed.

Under pressure from young radicals for results, Mr. Abu-Laban, the Copenhagen cleric at the forefront of the campaign, and several others formed the “European Committee for Honoring the Prophet,” an umbrella group that now claims to represent 27 organizations across a wide spectrum of the Islamic community. (Moderate Muslims dispute this and say the group has been hijacked by radicals.)

Frustrated by the Danish government’s response, the committee decided after a series of meetings in October and November that “our only option was take our case outside Denmark,” Mr. Abu-Laban says. There was growing interest from Muslim ambassadors in Copenhagen and their home governments, including Egypt.

Mr. Abu-Laban, who grew up in Egypt and was arrested there in the early 1980s after being expelled from the United Arab Emirates for his preaching, took charge of writing statements for the group and communicating with Muslim ambassadors. He denies holding extremist views, but acknowledges hosting visits to Denmark by Omar Abdel Rahman, before his arrest in New York, where the blind sheik now is serving a life sentence in connection with the 1993 World Trade Center bombing.

Mr. Abu-Laban began working closely with Cairo’s embassy in Copenhagen, holding several meetings with Egypt’s ambassador to Denmark, Mona Omar Attia. “Egypt’s embassy played a fundamental role,” he says. Egypt and other Arab regimes saw the furor as a good opportunity “to counteract pressure from the West” and “to show people they are good Muslims,” he says.

Ms. Attia, the ambassador, says she wasn’t motivated by political concerns but by personal outrage. “I was very angry. I was very upset,” she says, describing the cartoons as an unacceptable insult to all Muslims. She acknowledges meeting with the Danish clerics several times but denies coordinating strategy with them.

Mr. Abu-Laban and his colleagues decided to send delegations to the Middle East. They prepared a dossier to distribute during the travels. The document, which exceeded 30 pages, featured copies of the published cartoons and Arabic media reports about the controversy. It also contained a group of highly offensive pictures that had never been published by the newspaper, including a photograph of a man dressed as a pig, with the caption: “this is the real picture of Muhammad.”

Ahmed Akarri, a 28-year-old Islamist activist involved in the committee, says the photographs had been sent to Danish Muslims anonymously and were included as examples of Denmark’s anti-Muslim sentiment. He denies any attempt to mislead the Arab public about what had been published in Jyllands-Posten. Mr. Rose, the editor, describes it as a clear attempt at “disinformation.”

The first delegation left for Cairo in early December. As that nation was about to hold the final round of the first democratic election in modern Egyptian history, the government was battling accusations from some quarters of insufficient piety. Ms. Attia, the ambassador, denies that authorities tried to manipulate the cartoon issue as an electoral ploy.

One member of the Danish delegation, A
hmed Harby, an Egyptian who runs a cleaning business in Copenhagen, says the trip wasn’t designed to stir hatred against Denmark. It was intended, he says, to appease hotheads in Copenhagen and elsewhere who might take violent action if Jyllands-Posten wasn’t forced to apologize. He says he didn’t realize the dossier contained pictures the newspaper had never published.

Powerline also has a good roundup from the mainstream about the Imams and their disgusting game to ramp up the hysteria in the Middle East.