Chanting “God is Great,” they stormed the embassy, burned the Danish flag and replaced it with another flag reading “No God but Allah, Mohammad is His Prophet.”

Hundreds hurled stones and chanted, “God is Great!” before torching the building. 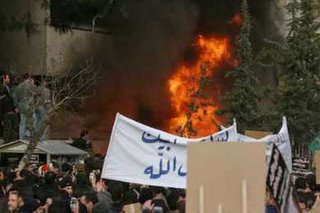 The Danish Embassy in Damascus has been torched!

Syrians have set fire to the Danish embassy in Damascus to protest against the publication of newspaper cartoons of the Prophet Muhammad, witnesses say.
The caricatures have sparked outrage in Muslim countries across the world, following their publication in a Danish newspaper in September.

The cartoons have since been published by several other European media.

Syrians have been staging sit-ins outside the Danish embassy almost daily since the row erupted.

The cartoons have sparked diplomatic sanctions, boycotts and death threats in some Arab nations, while some newsapers have defended publication of the images in the name of press freedom.

UN Secretary General Kofi Annan has called for calm and urged Muslims to accept an apology from the Danish paper that first published the cartoons.

The Danish Embassy was evacuated on Wednesday February 1, 2006 after bomb threats. 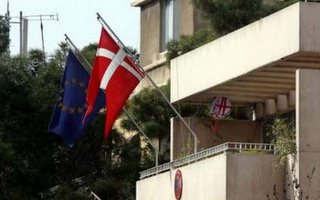 Danish and European Union flags are seen outside the Danish embassy in Damascus February 1, 2006. The embassy was evacuated after receiving a phone call claming that there was a bomb at the embassy. The phone call comes a day after hundreds of Syrians gathered in a sit-in protest in front of the Danish embassy in Damascus. The group were protesting against drawings, published in Denmark’s Jyllands-Posten newspaper last September, that seemed to portray the Prophet Mohammad as a terrorist. The drawings were reprinted in a Norwegian magazine earlier this month. (REUTERS/Khaled al-Hariri)

Hundreds took part in the attacks:

Hundreds of Syrian demonstrators set the Danish embassy on fire on Saturday to protest the printing by a Danish newspaper of cartoons of the Prophet Mohammad, a Reuters witness said. 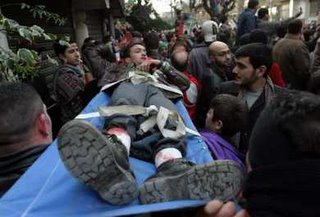 Hardline Islamists attacked the office building in Jakarta on Friday:

About 100 members of the Front of the Defenders of Islam (FPI) massed outside the building, chanting: “Let’s go jihad! We’re ready for jihad!”. One of their banners said: “Let’s slaughter the Danish ambassador!”

The group, mostly wearing their trademark white uniforms with skullcaps, broke through security to enter the building’s lobby, where they smashed lamps and threw eggs, but were quickly ejected by police and their own leaders.

Several then pelted the embassy’s external coat of arms with eggs.

Maksuni, the leader of the protestors, said ambassador Niels Andersen met with three representatives of the group and promised to issue an apology to the media in Indonesia, the world’s largest Islamic country. 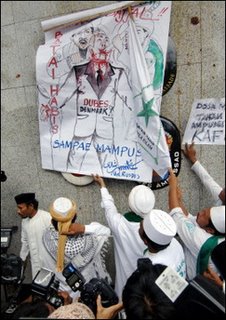 Angry protesters outside the Danish embassy in Jakarta. Scores of Muslim protesters took part in the demonstration to convey their anger over cartoons depicting the Prophet Mohammed published in a Danish newspaper(AFP/Jewel Samad)

Glenn Reynolds sees a case of the barbarians verses civilization.
Michelle Malkin made a movie… “First, They Came”
Davids Medienkritik says to “Buy Danish.”
Rantings of a Sandmonkey has more pictures.

After the Most Corrupt Election in History, Apple CEO Tim Cook Thinks It's a Good Idea to Have People Vote from Their iPhones