The Leftists in Denmark have quickly thrown in the towel on free speech. They are begging for forgiveness from the peaceful people out attacking US army posts in Afghanistan who are upset with the Muhammad with a donkey cartoon. The Danish apologists have their “We’re Sorry” site up and running. 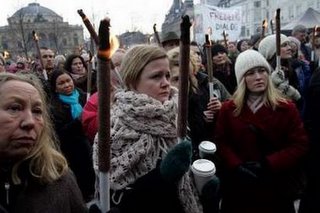 Hundreds of Danes gather for a peace torchlight procession demonstration to appeal for a peaceful dialogue to resolve a row that has erupted over the publication of cartoons of the Prophet Mohammed, in Copenhagen February 5, 2006. (REUTERS)

Here is the website’s letter…

A letter from Another Denmark

Dear Muslim citizens in Denmark and the World,

I wish to state the existence of another Denmark: A Denmark that wants to live in
peace with the Muslim world. There is another Denmark, which hopes for and believes
in respect and tolerance between religions and different groups of people.
As a Dane I have no responsibility for what a single and privately owned Danish
newspaper chooses to publish. Even so, I strongly condemn the actions of
Jyllands-Posten that have offended muslims around the world, and I understand the
need for an apology from the newspaper.

We all have a responsibility for treating each other, our religious faiths, and
convictions with dignity and respect. By publishing the caricatures of Muhammad, the
newspaper Jyllands-Posten failed their obligation to exercise with care and
consideration the right of freedom of speech.

I condemn all kinds of discrimination, prejudice and racism, whether it is directed
against Muslims, Jews, Christians or other groups in a society. Therefore, I reject
the hostile and prejudicial way of speaking that has marked several Danish,political
parties and media within recent years.

I want to make a request to all parts involved, that opinions and protests may be
conducted in a respectful and peaceful manner. Attacks on and threats against
individuals and assets only make the situation worse for all of us.

I believe in a world, where religions, ethnic groups and various political and
cultural opinions can coexist in an atmosphere of dialogue, tolerance and mutual
respect.
I wish to state the existence of Another Denmark that conceives itself as a part of
such a heterogeneous world and humanity.

In the sincere hope of international tolerance and respect.

Readers are also able to leave a message to their brethren in the Middle East and on Earth. Surely a spirit of love and forgiveness will consume Al Zarqawi as he reads over the wonderful messages posted. Hopefully, he will be able to share a few of them with Al Zawahiri at their next dinner party.

Here are a few of the comments that stuck out:

* Soli Madsen from Sandved wrote: “Dear brothers and sisters from the whole world !
Now is the time to make every loving person’ s dream come true:Let us accept each other as we are.”
(Halleluia! Peace Be!)

* bent larsen from aarhus v wrote: “a stranger is a friend you haven’t met yet”
(Until you meet Al Zarqawi!)

* Ulla Find Andersen from KÃ¸benhavn wrote: “Freedom of speach is for people of the world. It has a brother & a sister called “respect” and “responsibility”.
Ordinary people in Denmark know.
For peaceful co-existance, Ulla.”
(And, it has a momma and a papa, too!)

* Anette El hadari from HjÃ¸rring wrote: “Always remember that the prophet (saws)was a loving man who foregav other people for their mistakes!
May Allahs blessings be with you all!!”
(The prophet “Saws” Hmm. Which book was he mentioned in again? )

* Elene SÃ¸ndergaard from Hundested wrote: “Dear sisters and brothers,
We are all human beings on our planet – EARTH.
By showing mutual respect for each other, we can all live in PEACE.”

* Dorthe SÃ¸rensen from Harlev wrote: “Some fools have damagede the local pizza-place because of these stupid drawings – I don’t understand why people have to be this mean to eachother.”
(Dorthe was hungry!)

* Kirsten Gronlund from Albertslund wrote: “Dear friend! The Danish people never wanted to discriminate your religion we respect your good. In my town we have the first muslim graveyard in Denmark, and I’m proud of this! Kind regards, Kirsten.”
(Creepy.)

* a hansen from hillerod wrote: “I am so sorry about these stupid drawings.
We are so many in Denmark that respect Muslims.
We all have to respect all religions. Im ashamed to be Danish
when I look at these drawings.”
(a hansen is ashamed of this. a hansen needs help.)

I signed the letter with this, something short and to the point:
Jim H. from USA wrote “Did you know that one picture was a of hog calling contest?”

You may review the letter HERE and send your greetings to other earthlings on this page HERE.