Yesterday, A. M. Mora y Leon reported on the sad story of Maria Corina Machado, the leading Venezuelan democracy activist and founder of the non-governmental agency Sumate, who was sentenced to 16 years in jail this week. The politicized judge ruling on her case, also demanded to detain Maria — in an abysmal Venezuelan prison — when she returns to court on Feb. 14. 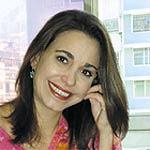 This is horrible news for Venezuela’s democracy movement. But, it is worse for the young and brave, Maria who leads the Sumate.

Earlier this year Maria met with President Bush at the White House.

V-Crisis had this to say about the meeting:

By receiving the leader of SUMATE the US declares that in Venezuela there is a problem with free and fair elections (to Hell with the Carter Center who somehow managed to convince Colin Powell that all was fine and dandy down here).

This is what Maria Corina Machado says about the prospect of going to jail:

“I’m scared, I’m very scared; I have three kids,” the political activist says softly, sitting in her small office in the Caracas headquarters of Sumate, the organization that led last year’s unsuccessful bid to recall President Hugo Chávez from office. Machado is facing criminal charges for allegedly endorsing the April 2002 coup which unseated Chávez for 48 hours, and for Sumate’s having accepted US government funds. 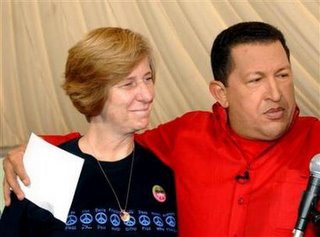 Cindy Sheehan and Hugo Chavez hit it off at his marxist World Social Forum held in January in Caracas. Cindy also has a strong fan base in Cuba and Iran.

Today, the “Cindy for Senate” website is asking Cindy, to speak with her pal, Hugo for the release of Maria Corina Machado:

What are the odds that Cindy will act to help rescue Maria?

Also, “Cindy for Senate” still has its poll question running, so you can still urge Cindy to run for US Senate! Even if nasty Barbara Boxer doesn’t like the idea..

There are other priceless updates on the site including this:

This morning I checked the site stats for this page and noticed that we received 8 visits from the web address senate.gov this morning. I wonder who that could be? Well Senator, if you are still watching, let me be the first to wish you a happy retirement.

After receiving over 200 emails today and every last one of them encouraging (except one from Massachusetts of all places), the poll is staying open. We will keep the poll going until Cindy decides to run. I will try to bring you updates about Cindy by linking to other blogs.

Unlike the Gestapo tactics we have seen in Washington this week, we will permit free speech. We will bring you articles from both the good and the misinformed.

You will have to check it out! There are many more updates.

And, with all seriousness,… please keep Maria and her family in your thoughts and prayers during this difficult time.