Gee, you’d think that this would have made a few headlines…

At least in Great Britain. 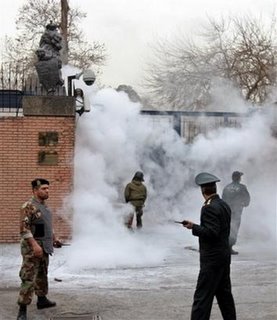 Iranian police officers, try to put out the fire at the British Embassy in Tehran, Iran, Tuesday, Feb. 14, 2006, started with a Molotov cocktail, in a protest over Prophet Muhammad drawings published in European newspapers. (AP Photo/Vahid Salemi)