After scaffolding collapses, bridge workers dangle from bridge over the Mississippi River,
INCREDIBLE VIDEO HERE
(KMOV)
(There is no sound with this video.)

One worker who was trying to rescue his three friends is missing after falling into Mississippi! 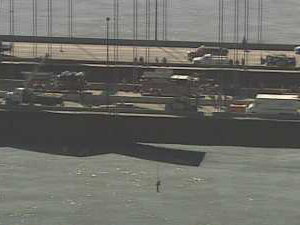 A man hangs from his safety harness for nearly an hour after his scaffolding collapsed while working on the Jefferson Barracks Bridge.(KSDK)

The missing man is a painter who was trying to rescue the three menwho were dangling from the Jefferson Barracks Bridge in south St. Louis:

A painter working beneath the Jefferson Barracks Bridge fell into the Mississippi River while trying to rescue three co-workers who dangled on tether lines from a collapsed work platform.

A St. Louis fireboat and three small tugboats searched the Mississippi southward to the Meramec River.

The collapse occurred about 11:30 a.m. today, said Mehlville Fire Chief Jim Silvernail. He said it took about an hour for firefighters to pull the three dangling painters to safety.

After their scaffolding collapses leaving three men dangling from safety harnesses for an hour. 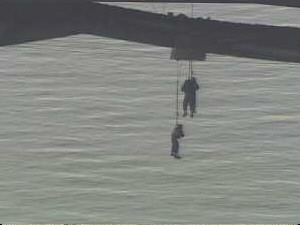 The local fire departments are still searching for the missing worker who fell in the river:

Mehlville Fire Department Chief Jim Silvernail says the worker who fell into the water was seen near a barge, but the worker was still missing. Boats and helicopters were searching for that worker.

At the same time, rescuers were trying to free 3 workers who were suspended from the bridge in harness equipment. The first two were pulled to safety by noon, and the third was rescued just a few minutes after noon Friday afternoon.

The Associated Press has learned that the company the men worked for has had at least two similar
accidents since 1994. In both cases, men who fell during bridge work died and their safety equipment was questioned.

The Jefferson Barracks bridge crosses the Mississippi on Interstate 255, near the intersection of I-270, I-55 and I-255 south of St. Louis. Traffic was stopped during the rescue efforts.

Anyone who is familiar with barges knows that it is very dangerous to be in the water near them. Rescuers were still looking for the worker as of 3:30 PM CST.

Update: (7:00 PM CST) The painter, Jimmy Belfield, is still missing. Please remember his family and friends in your thoughts and prayers.