Another case study for the “Books not Blowtorches” movement. 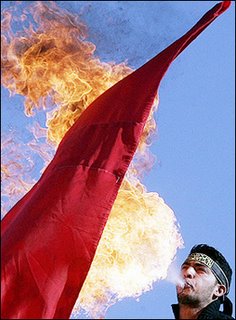 A Palestinian militant of the Islamic Jihad movement spews out benzine to set on fire a Danish flag, during demonstrations against the publication of cartoons depicting the Prophet Mohammed, in the West Bank city of Bethlehem. (AFP/Marco Longari)

Benzine is a carcinogen.

All Things Conservative has more images of Muhammad.