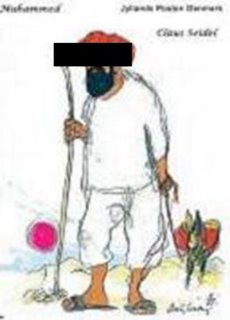 This came from a Muslim reader in Sweden with descendent’s close to the Prophet Muhammad, himself:

The Danes shouldn’t have slept through their religion-classes – how on earth did they think that caricatures of Muhammed wouldn’t enrage the muslim world?”

For your information, both of my parents are Muslims, my dad Arabian and my mom European.

I had no idea that drawing an image of a random guy in a turban, labelling it Mohammed and implying that it is “zOMG Teh founding Mohammed of the religion Islam” would piss people off like this!

This in spite of my father’s family tree being descendant of one of Mohammed’s helpers.

As far as I see it, people are exploiting this even worse than what the different sides exploited the schiavo case. Compare this to the reprinting “Little Black Sambo” problem that arose earlier. Some of the cartoons of Muhammed are nothing I can see as anything offensive, for instance the one with “Mohammed” against the sunset. Rather nice image, to be honest. However I easily can see why a lot of people are offended at the depictions of him/muslims as an animal f*cker. (Those were “fake”)

The koran was based on the religion of the jews and the religion of the christians. Jesus is one of the prophets, even. Which is why I pretty much see the three religions as merely three different flavours of the same concept. Also, don’t forget that Christianity has hundreds and thousands of flavours, several directly contradictory to other flavours. For instance, put an amish in the same room as an evangelist, and I seriously doubt they’d be too friendly to eachother. People are people, look beyond the labels and see the motives of the leaders of and trolls from any side, and realize that they cannot justly represent any people.

But then again, what do I know. I’m just a young, Swedish, globally aware adult female with a dislike for fundamentalists, regardless of what religion or attitude the hatemongers are being fundamentalists of.

I keep hearing this from moderate Muslims that it was not this big crime that the Radicals in Islam and the mainstream media (CNN- see above) want you to think it is. Yet, the West seems to be in retreat, again, anyway.

No surprise really,… John Stephenson notes on how someone is making a buck on the controversy.