Laura Bush joined Cherie Blair in Turin, Italy for the start of the 2006 Winter Olympics. Laura traveled with members of the U.S. Presidential delegation (members pictured below) as she worked her way to the 2006 Olympic Games. 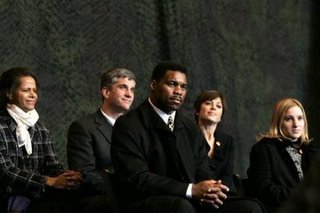 Dorothy Hamill and Kerri Strug also appeared at the Republican National Convention in 2004.

And, via Instapundit, Pajamas Media will be tracking the Turin medal haul .