From an all-time high of more than 622 percent in January 2004, the inflation rate dropped marginally last year but inflationary pressures have remained high and there are fears it will soar beyond 600% in the first quarter of this year. The CSO director Moffat Nyoni told journalists that price pressures have been fuelled by a sliding Zimbabwe dollar, which has dramatically boosted the cost of imports. Nyoni said prices for bicycles rose by an annual rate of more than 2,000 percent in December, as did fees charged by hairdressing salons. Costs for medicine and postal charges jumped by more than 1,000 percent year-on-year.

In the spring of last year the Mugabe Regime destroyed hundreds of shanty towns leaving as many as 700,000 Zimbabweans homeless. 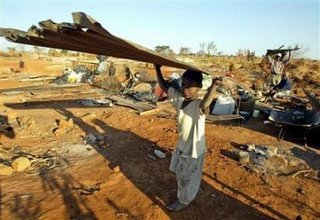 A Zimbabwean boy carries a roofing sheet to rebuild his familys home in the Hatcliff settlement on the northern outskirts of Zimbabwes capital Harare July 21, 2005. (Stringer/Reuters)

The Mugabe Regime admitted this week that the land seizures has actually displaced more blacks than it has benefitted:

A land ministry audit laid bare Mugabe’s destruction of agriculture, the backbone of Zimbabwe’s economy. The scheme has benefited only 4,867 people, while the official target was 50,000. At least one third of the land given to “new farmers” is lying idle at a time when Zimbabwe is suffering food shortages so severe that some three million people need emergency help from the World Food Program.

The audit found that nothing is happening on 11 percent, where “no agricultural activity” was recorded. Another 30 percent is classed as “underutilized.” Before the onset of the land grab five years ago, about 300,000 black workers lived on white-owned farms. Most were forced to leave and reduced to destitution when their farms were seized.

The audit has shown that very few people were resettled in their place. Even taking into account another scheme under which greater numbers of peasant farmers were given land, it seems certain that Mugabe’s land grab has displaced more blacks than it has benefited. The relative handful of winners was disproportionately drawn from the regime’s senior ranks, with cabinet ministers, generals and judges all helping themselves to land.

The government blames foreign owned banks of sabotaging the land reforms by not loaning money to black farmers who did not have title to the land they were farming.

A cholera and thyphoid epidemic left dozens dead last week in Harare and Chitungwiza. In less than two weeks since the disease came on the scene, over fifteen people have succumbed due to a combination of lack of medical attention or ignorance of the disease’s symptoms. Meat and fish vending has been banned in the capital to try and stop the spread of the disease.