Every few months the mortality equivalent of two southeast Asian tsunamis plows through this African nation. 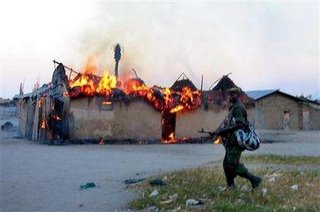 A Congolese soldier walks past burning homes in the village of Nyakakoma, in eastern Democratic Republic of Congo, July 15, 2005. The Congo conflict is the deadliest humanitarian crisis of the last 60 years but the world is still not doing enough to save lives, according to a survey on Friday. (REUTERS/Marlene Rabaud)

The world’s deadliest crisis is claiming 38,000 lives each month:

The conflict in the Democratic Republic of Congo is killing 38,000 people each month, says the Lancet medical journal.

Most of the deaths are not caused by violence but by malnutrition and preventable diseases after the collapse of health services, the study said.

“Congo is the deadliest crisis anywhere in the world over the past 60 years,” said Richard Brennan, health director of the New York-based International Rescue Committee and the study’s lead author.

“Ignorance about its scale and impact is almost universal and international engagement remains completely out of proportion to humanitarian need.”

The results showed Congo’s monthly mortality rate was 40 percent higher than the average for sub-Saharan Africa — 2.1 deaths per 1,000 people, or the equivalent of 1,200 fatalities per day, compared with a continental average of 1.5 deaths per 1,000. 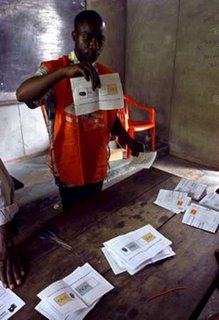 A Congolese election worker counts ballots in Kinshasa December 19, 2005. Voters in Congo’s war-ravaged east have turned out in huge numbers to vote on a constitution designed to end years of war and chaos, U.N. officials and diplomats said on Monday as voting ran into a second day. The vast country is holding its first national democratic election in over 40 years to decide whether to adopt a constitution paving the way to elections next year. (REUTERS/David Lewis)

Researchers visited nearly 20,000 households across the country over a three-month period in 2004, recording births and deaths over the previous 18 months.

In some parts, death rates were double the pre-war level, while the mortality rate in the city of Kisangani dropped by 80% after fighting there stopped in 2002.