27 Sudanese were killed in a small park on Friday night in Cairo. 11 were children.

Today a spokesman for the UN lashed out at the Sudanese refugees who were camped outside of a UN office before the attack.

Sudanese refugees were pounded with water late Friday night and then in the early morning, forcefully removed from a park outside of UN headquarters in an affluent Cairo district by club wielding Egyptian police. The refugees had been protesting in the park for three months against what they saw as the UN High Commissioner for Refugees’ (UNHCR) failure to help resettle them to another country.

Thousands of Egyptian police stormed the park in the early morning. One Egyptian blogger, Nora Younis was at the Cairo park that night after a house helper from Sudan tipped her off to the protest. 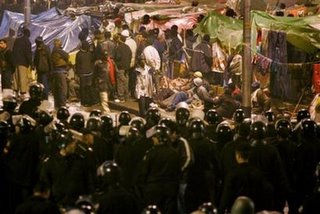 Sudanese refugees and migrants stand by their makeshift tents behind rows of Egyptian security troops who fired water cannons on them before storming the protest camp housing hundreds of Sudanese where they had lived for three months demanding resettlement outside of Egypt, in Cairo, Egypt Friday, Dec. 30, 2005. After a night-long standoff during which the camp was surrounded by thousands of riot police, the security forces charged in wielding batons and sticks, leaving 27 dead according to the Egyptian Interior Ministry. (AP Photo/Ben Curtis)

The UN spokesman at the Egyptian press conference today blamed the deaths on the Sudanese refugees!

UNHCR goodwill ambassador and Egyptian actor Adel Imam, who was also at the news conference, said he regretted the deaths of the protesters, but accused them using their children as human shields, attacking policemen and abusing Egyptian law.

“There were talks between the police and the protesters for five hours, but the protesters refused to budge. They put their children in front of them as human shields,” Imam said.

The refugees say they face racism, unemployment and a lack of education and healthcare in Egypt since they fled violence in Sudan.

The UNHCR says ordinary Egyptians face similar difficulties finding work or accessing services, and says it cannot move all refugees to countries in the West.

Adel Imam appeared in a controversial film on Israeli-Egyptian relations in 2005. 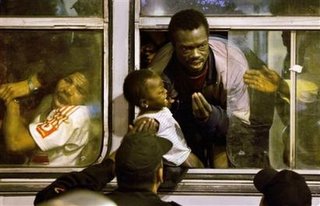 One Sudanese refugee, left, cries out as he is grabbed by riot policemen, as another, right, tries to hand over his child through a bus window, after both were arrested by Egyptian security troops. (AP)

27 Sudanese were killed in the clash including 11 children. 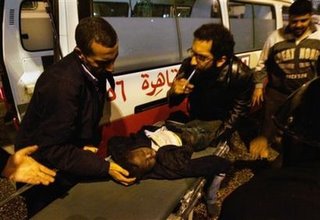 A reporter, right, carries the body of a Sudanese refugee girl believed to be between 3 and 4 years old to a paramedic, left, who pronounced her dead, after Egyptian security troops fired water cannons and stormed the protest camp housing hundreds of Sudanese refugees in Cairo. (AP)

Later today Egypt announced that it would begin deporting Sudanese refugees this week by way of sea back to Sudan.

Freedom for Egyptians wrote about the Sudanese in Egypt this weekend.

Big Pharoah is taking a wait and see approach.