Opening arguments got underway Tuesday in the federal trial of a Greenfield man accused of selling names of covert operatives to Saddam Hussein. 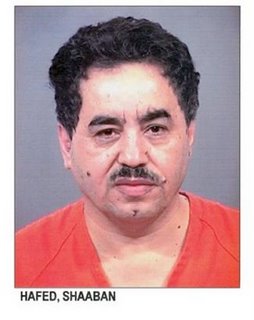 Shaaban Hafiz Ahmad Ali Shaaban, known to his neighbors in Greenfield as Joe Brown, (and goes by at least a dozen different names) is representing himself in the trial where he accused of being an Iraqi agent.

The former Mukhabarat officer, testifying under the alias “Mr. Akram,” identified the Greenfield man, seated at the defendant’s table in the Indianapolis courtroom, and said he met with him at a bugged room at the Al-Rashid Hotel in Baghdad to negotiate the deal.

At first, he said, Shaaban Hafiz Ahmad Ali Shaaban, 53, wanted $5 million to help the Iraqis learn how the U.S. Central Intelligence Agency was infiltrating Iraq before the spring 2003 invasion.

Later, the Iraqi official said, Shaaban cut his price to $3 million. The deal fell apart after Shaaban returned to the United States and could not produce the promised CIA documents, the witness testified.

The Mukhabarat operative said the Baghdad meeting came about after Shaaban had contacted Iraqi spies at the United Nations mission in New York and had offered to sell the names, including those of CIA agents.

Shaaban, whose trial began Tuesday, asserts he was working for the CIA. He has been held in the Marion County Jail since his arrest last March on charges of illegally acting as an agent of Saddam Hussein’s Iraqi government. If convicted, Shaaban faces up to 65 years in prison.

“Joe Brown” is defending himself in the trial.