One witness expected to testify is a former agent in the Iraqi intelligence service. Court records contend he met with Shaaban at the Al-Rasheed Hotel in Baghdad in November 2002 to negotiate terms of the sale of US intelligence information for $3 million. 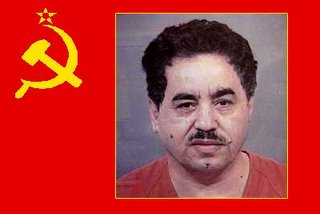 Jury selection begins today for the Indiana truck driver accused of being a spy for Saddam Hussein:

The man (Shaaban Hafiz Ahmad Ali Shaaban), who says he was born in Jordan, contends the charges are false. He says he’s been confused with a dead twin brother who he says worked for the C-I-A.

The government alleges the man traveled to Baghdad in late 2002 and agreed to sell the names of American agents and operatives to Iraq for three (m) million dollars. Court papers say he also allegedly offered to organize so-called “human shields” in Iraq.

An indictment lists more than a dozen names for the man.

A former Iraqi intelligence agent is expected to be among the trial witnesses. At least two witnesses will be disguised.

Sabiz was trained in espionage in Soviet Russia some 30 years ago and his first wife may still live in Florida:

In 1972 he lived in Moscow and married his first wife, Svetlana Anatolevna Shaban. It’s unclear whether they were divorced, the news site wrote.

During his stay in Moscow, the U.S. government says, Shaaban received training from Russian intelligence agents. The documents do not detail what kind of training. Authorities refused to elaborate.

At the time, Atkeson said, the Soviet Union was active in the international spy game.

“They did everything. You name it, they were up to it,” Atkeson said, noting that the fact that Shaaban was allowed to enter Russia is a signal that he was likely recruited.

“It was a police state —- nobody came in without their clear interest,” Atkeson said. “They would take a Jordanian with the idea of using him somehow.”

Shaaban’s first wife is thought to reside in Florida. Attempts to reach her were unsuccessful.

It does seem odd that two and a half years since Saddam was overthrown the witnesses still wish to be disguised?